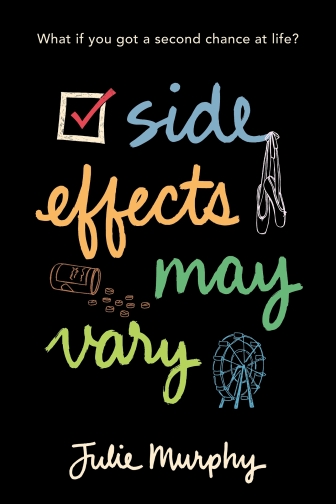 First Lines: If my parents ever gave me a religion, it was the gospel of honesty.  Babies don’t come from storks, and my mom never dared to tell me that a flu shot would hurt her more than it hurt me.

This is a book I’ve been dodging for a while, even though I wanted to read it.  I mean, it’s a cancer book, which almost assuredly meant it was going to be sad, right?  I’m really hit and miss with cancer books, so I just kept waiting until I felt like I was ready for it.  Ironically, I read it while sick with something unidentifiable. Maybe a cold, maybe the flu…no one knows.

When Alice is diagnosed with leukemia, her outlook is grim.  She’s not likely to make it to her 17th birthday next year. But she knows she’s going to spend her remaining time righting the wrongs in her life.  She convinces her best friend Harvey to help with her list that is as much about revenge as it is about spreading hope.  But just when Alice is ready to die, she goes into remission.  Suddenly, Alice is forced to face the consequences for things she never imagined.  Has she caused irreparable damage around her, and to the one person who matters the most to her?

Slightly off-topic, but for those of you about my age, you might remember this 2001 movie called Max Keeble’s Big Move, where this kid discovers his family is being relocated and he decides that he’s going to get back at the bullies before he leaves…and then he finds out that they’re not moving after all.  When I read the premise for this book, it strongly reminded me of that.

Ok, back on topic.  I had a really hard time deciding what I thought about this book.  It wasn’t one where I finished and went, “Well, that was awesome!”, but I also didn’t go, “Eh, that could’ve been a lot better than it was.”  I just…I don’t know how I feel about this, and I finished it a couple of days ago.

Alice is one of the reasons.  She is an incredibly unlikable character for approximately half of the book.  (But I’m really trying not to let that impact my rating because unlikable characters are usually intentionally written–and well written at that.)  It fit her character that she’s be so bent on getting revenge against a couple of her classmates.  I mean, she’s dying and these people made her life miserable.  So I understood her motivation and that aspect of her.  But her personality came off as whiny, obsessive (about the list), and uncaring.  She used the people around her to reach an end and didn’t seem to care as she did it.

If the story had been simply about Alice, I think I would have quit partway through it.  But there was sweet Harvey there as well, telling his half of the story.  Harvey had my complete sympathy.  He stood by Alice through everything, even though he knew she was using him.  One of the characters described him as having a “porcelain heart,” and I thought that was pretty accurate.  It was his love for Alice that made me see the good in her.

The narration frequently switches not only between Alice and Harvey, but between the timeframes of “Then” and “Now.”  It’s so easy to get lost if you don’t pay attention to the chapter headings.  The only complaint I have about the narration is that it seemed to completely stall out the beginning of the story.  I felt like I was trudging through knee-deep mud, that was the pace it set.  It felt like it took half the story for me to finally sink into it and want to keep reading.

I do think this book is worth taking a look at.  The character transformations were fantastic, which is something I really like in stories.  But, you know, you have to get through Alice’s early attitude to get to that part.

Overall, I found it to be a good story with a good moral to it, but it never particularly gripped me.

2 thoughts on “Side Effects May Vary”