I was originally going to get on here and post a book review, but the longer I sit here, the more I don’t think I can do it right now.

We had to put our oldest dog down today, which is a little ironic when you consider how I told you guys the other day that my friend had to put hers down.  We’re going to be such messes at work tomorrow, the two of us.  Our dog was a 15.5 year old Lab mix, who pretty much outlived all of his litter mates by a lot.  I even started calling him immortal because if you could just see this dog, you’d be kind of amazed at how good of shape he was in.  He spent all day just pacing.  (We think that’s part of why he lived so long.  He definitely got his workout.) 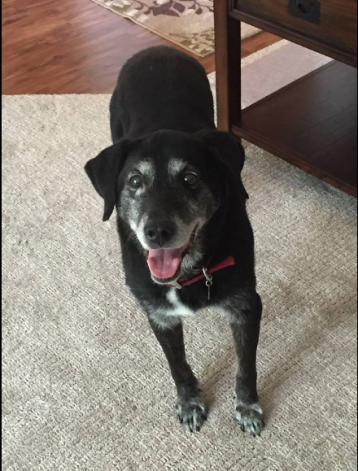 This is Bear.  …was…I guess.  This was taken just a few days ago.  Totally got the old man whiskers going on.  He’s had them for so long now that he doesn’t look the same without them.

We got him when I was only 9 years old, about 2 months after we moved to a new house.  I was really upset about moving, but a puppy does wonders for making you feel better.  I suddenly had a buddy.

This dog was such a watch dog.  If anyone jogged on the street past our house, he had to bark at them.  A squirrel is too close?  Bark.  Constantly.  But that meant he was really protective and I totally believe that even up to today, he wouldn’t have let anyone into the house that he didn’t approve of.  (One of my more mentally-lacking boyfriends in high school stupidly put his hand in Bear’s crate even though Bear was growling and the bf could have lost some fingers if he didn’t have such fast reflexes.  Common sense, dude: if a dog is growling, don’t put your hand closer to his face.)

He was so much fun to watch growing up because he just never seemed like a dog.  He loved jumping as a young dog, and I don’t mean jumping on people.  He had quite the vertical, one that basketball stars would be envious of.  He would jump with excitement rather than wag his tail.  When we went up to the lake, he spent hours pouncing in the shallow water and barking when it splashed him in the face.  Which it always did.  It was a vicious cycle, but one that was so entertaining to watch as a 12-year-old.

Obviously, as he got older he mellowed out.  His energy lessened.  His hips started paining him.  He had cancer in his tail that had be to be amputated.  Eventually, he got really bad arthritis that made him walk with a hunch and take 10 seconds to fully lower his butt to the ground to sit.

And that’s what tipped us off that there was a really serious problem lately.  Yesterday while I was at school, I guess he started like, walking sideways because his hips were bothering him so much.  And then he couldn’t get his back legs underneath him to stand, so he looked kind of crippled.  He wasn’t eating.  But otherwise, he was the same Bear in personality.

I actually didn’t believe my mom when she told me he was so bad because when I saw him last night, he was the same as usual.  Pacing the floor, begging for ice from the freezer, hoping we’ll give him treats, annoying the hell out of our 7 month old puppy.  Totally normal.  But she and my dad made a vet appointment for him for today and I pretty much knew that was it for him.  How many vets are going to look at a 15 year old dog who is 2-3 years past his breed’s life expectancy, half-deaf and -blind with arthritis and say he’s ok?  I can’t imagine that many would.

And this one didn’t.  He said that from this point on, it was really just going to be a matter of time before his quality of life just became awful (can’t walk, can’t control his bladder, etc.).  So my dad made the decision we all knew (more or less) was coming.

I knew this was going to affect me, obviously, and it is, but I’m also lacking that element of surprise that often accompanies death.  I’ve been mentally preparing myself for this since I left for college in 2010, fearing that he would die while I was gone.  There were many mornings when we’d go to check on him, unable to tell if he was still breathing or not.  (There were even mornings when I made someone else get him up because I was terrified of being the one to find him.)  Morbid?  Possibly.  But I have so little experience with grief and loss that it kind of made sense at the time.

So here’s to Bear, the jumping bean, the comforter, the protector, and most importantly, the dog that shared my birthday.  25 is going to look very lonely without you, buddy.