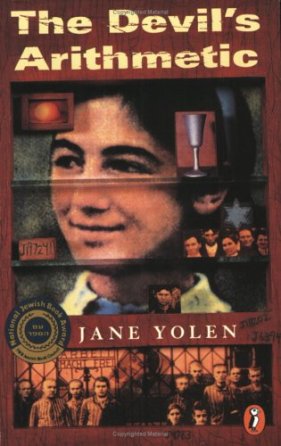 (I don’t have the first lines right now guys.  Sorry.  I took the book back to school already.)

We’re at that time of year again where my students are back to reading Holocaust literature and I feel the nearly overwhelming desire to reread The Book Thief for the 5th time.  (I’m losing.)  This is one of the books we offer and a few of my students picked it because I hadn’t read it before.  So, naturally, I took it home and read it before they did.

Twelve year old Hannah thinks this Passover Seder will be the same as always: boring and filling with relatives who will comment on how much she’s grown, even though they saw her a few weeks ago.  But that all changes when Hannah is mysteriously transported back in time to 1942, Poland, where she becomes a young girl named Chaya.  The more Hannah lives in Chaya’s life, the more she forgets of herself as Hannah.  The Nazis are invading…can Hannah survive the horrors that await her?

This was…interesting.  I wasn’t sure what I was going to be getting.  Hannah starts off the story as a real brat.  She almost refuses to go see her family for the holiday and she whines a lot.  She was…difficult.  I didn’t like her too much and I thought this was going to be a loooong book.

But after that, she started to change.  When she gets thrown back in time, she’s forced into a completely different situation and she’s forced to adapt.  She’s still a little bit bratty, but the horrors of the Holocaust tend to change a person.

I actually really liked the minor characters here, particularly Chaya’s uncle Shmuel.  But I have a soft spot for guys with a constant smile and an air of kindness.  It is a little difficult, though, to follow all the characters.  There are basically two sets of characters to keep straight, and as my students will tell you, sometimes that’s a challenge.  But that’s pretty common to any time travel story, so I kind of expected it.  My students, on the other hand, may not have.

It does draw you in.  I found myself finishing it in a single night.  It moves fast and the plot is interesting.  There were some things in here about the Holocaust that I’d never heard before that Yolen gleaned from interviews with survivors.  It just goes to show how every camp, every situation was a little different.

This was really good.  I’m still trying to get up the courage to watch the movie (starring Kirsten Dunst) because it’s so different from the book.  I watched the first 12 minutes or so and it’s barely even the same story…that makes me nervous.

3 thoughts on “The Devil’s Arithmetic”