Hey-o!  Long ago, in the year 2012 or so, I started this poorly remembered segment to talk about trends that I noticed in literature.  (When I started this, vampires were on their way out and dystopians were the new hot thing.)  But every now and then since, I’ve started noticing trends and I sometimes put my thoughts together long enough to do a post.  So, voila!  We have a new trend.

*Each book is linked to its Goodreads page for more information. 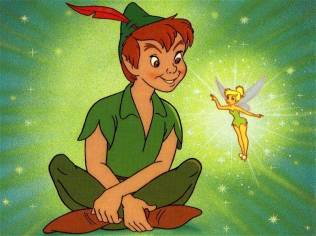 Alright.  Do not misunderstand me, I love Peter Pan as much as the next person does, but I think maybe that Peter Pan Live! on NBC a few years ago kick-started the imagination of a lot of writers because we are being inundated with it now.

Not that we didn’t have Peter Pan retelling before.  The obvious one that comes to mind is Tiger Lily by Jodi Lynn Anderson.  Told from Tinkerbell’s perspective, it was a nice twist on the story, and that came out in 2012.  Even Second Star by Alyssa B. Sheinmel came out in 2014 with a more contemporary twist.

But in this 2015-2016 book season, there’s a complete avalanche of Peter Pan stories, as varied as the authors are.  (Though, ironically, many of them have changed Wendy’s name to Gwen and the titles still use some variation of the never/ever combo.)

Everland by Wendy Spinale is a World War II-era story of Gwen and her siblings who survive the London blitz and try to stay out of the clutches of German Captain Hook.  (Of course, they get some help from a boy named Pete and his friends.)

Never Never by Brianna Shrum is the story of James Hook, who simply adores Peter and wants to be one of the Lost Boys until things don’t go as expected.

Never Ever by Sara Saedi is a modern retelling where a girl (Wylie) is trying to escape the reality of a brother who may be going to jail.

Stars by Colleen Oakes looks like the most true-to-the-source book on this list.  It involves Wendy, Peter, Neverland, the Lost Boys, and everything as we’ve gotten used to the story.  Only it seems to take a little darker turn where Peter is concerned.

Unhooked by Lisa Maxwell is the story of Gwen (see?  Another one!) who is kidnapped by Fey and taken to a land called (you guessed it) Neverland.  There she meets a charming hero and a roguish pirate, both promising to protect her.  I smell a love triangle.

The Neverland Wars by Audrey Greathouse is the story of Gwen (again), a normal girl with a normal crush on the homecoming king.  And when her sister runs off with Peter Pan, she’s forced to chase after them, introducing her to the magical world she didn’t know existed.