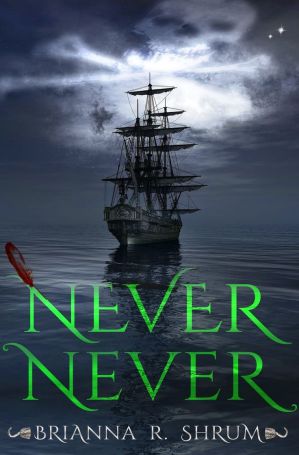 First Lines: All children, except one, wish to stay young.  James Hook, however, wanted to grow up.

This was another lovely Peter Pan retelling that I wanted to read after doing my Next Big Thing article on it.  And I’m pretty sure the copy I picked up from the library had never been checked out.  Lucky me!  That book was pristine.

12-year-old James Hook is quite happy growing up.  But when James meets Peter Pan, a boy who plays and pretends all day, he decides that it can’t hurt to be a child for a little while.  James joins Peter on a holiday to Neverland, but it’s not the Neverland he expects.  Soon he wants to return home and grow up…but Peter won’t take him.  Trapped in Neverland, James begins to grow up to spite Peter Pan…and Peter’s not content to just let James go.

Basically, this is the Disney movie told from Hook’s perspective.  I mean, so many of the events of the story come straight out of that movie.  (I’ve never actually read the original story, so I don’t know how similar it is to that, but I do know it’s incredibly similar to the movie.)  There’s a lot of Hook’s backstory here as well, but you definitely get to see characters like Smee and the ticking crocodile and Tiger Lily among others.

James is an interesting character.  He is determined to grow up until Peter shows up.  In that respect, he’s much more mature than Peter, who can actually forget unpleasant things at the drop of a hat.  (It’s actually disconcerting to both us as readers and James.)  For some time, he puts up with Peter’s antics because he wants to have some fun.

But this story is all about how a young boy turns into one of the best known villains in literature.  It’s almost like watching his descent into madness, except he’s not actually going mad.  Well, mostly.  And while I expected there to be some elements to James that I didn’t like, perhaps one of the most irritating was his constant whining and moping.  I suppose it’s a holdover from him being a child (we are in Neverland, after all), but it was annoying.

I liked that none of the characters were exactly what you’d expect.  James isn’t as evil as you’d think.  Peter isn’t the hero you want him to be.  Smee isn’t an idiot.  Tiger Lily isn’t passive.  Even the Lost Boys aren’t as sweet as they look.  It was still close enough to the original tale that everyone was recognizable, but there were subtle twists on their characters that sort of modernized them and gave them depth.

The plot was slowly killing me, though.  It was a cycle of fighting, moping, finding entertainment, and beginning the cycle again.  I went on a cleaning binge again because I couldn’t stay focused on the book.  (My bookshelves look amazing now.)  I just struggled so hard to stay interested.

And the ending of this book had virtually no falling action or resolution.  It’s one of those stories where the climax goes right up to the last page and it just ends.  No wrap up.  I saw it coming, but it didn’t make it any easier to handle.  I need more of a finale than that.

So far, I have yet to find a Peter Pan retelling that really sweeps me away.  Because while this had some interesting moments, it really wasn’t anything to write home about.