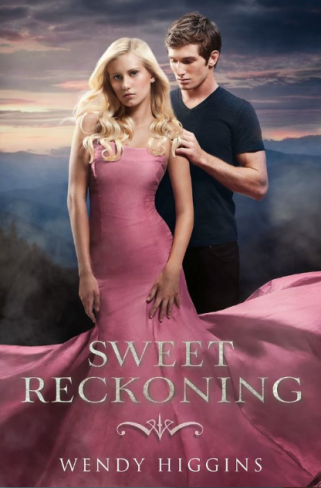 First Lines: Not a soul in the Vegas cocktail lounge had any idea demons were in their midst.

This book has been on my to-read list for ages, but this is that series for me that I constantly procrastinate reading.  You have those?  The ones where even after you get the book, it sits on your shelf for months if not a year before you *finally* decide it’s time.  And then you wonder why you procrastinated so long.  (Or maybe not?)

Evil is loose in the world, and Anna knows it’s only a matter of time until it finds her.  Life under the Dukes is oppressive and degrading, and Anna’s determined to end their reign.  Instead of it being a weakness, Anna is going to prove that love is her true strength.  But that’s hard to do when her loved ones are constantly targets as well.  And when the Dukes send Anna’s great love, Kaidan, to work against her, Anna will have to decide what’s worth fighting for…and if she can manage it alone.

Like I said, I waited a long time to read this.  Not because I thought it would be bad, but it just never found its way to my “anxiously awaiting” pile.  And I didn’t exactly remember a ton from these books even though I took notes on their endings.  I was kind of a hot mess going into this.

But I quickly remembered a lot about the characters and the plot.  Some of it came back to me and other bits and pieces I just had to fill in using my imagination.  It happens.

Easily the cutest part of this book was Anna and Kaidan.  For real, they were adorable.  I totally think Kaidan did the most growing of all the characters in this book, but Anna definitely had her own challenges to overcome.  And it was interesting see how they dealt with being pitted against each other.

As you may expect if you’ve stuck with this series, the minor characters are also sweethearts.  Marna is my favorite, but Blake and Ginger weren’t far behind.  It’s just really cool seeing all the characters together and interacting with each other.  I enjoyed that, whether they were fighting or getting alone.

The plot doesn’t go the way you think it will, even if by the end you felt like you’d called it.  There were a lot of things that happened that I either didn’t see coming or didn’t even think I should suspect were possibilities.  Some weird things happened too, but that is not a bad thing.  I never quite knew where things were going.  Well, except for the ending we were all waiting for.

I know I’m going to sound a bit weird for saying this, but it was fun to read about bad guys who were nearly omnipotent.  It created a real sense of paranoia that at any moment, Anna and her friends could be overheard or seen and be turned over to the Dukes.  I liked the interesting challenges that brought and how they had to subtly work around those challenges.

I’m not going to say this novel is perfect.  It’s not.  It frequently crosses into cheesy territory.  The ending wasn’t quite as climactic as I was hoping.  Some aspects could have been better, but it was still fun.