Hey guys!  So this week’s topic is kind of open ended.  We get to pick any topic that relates to school in some way.  I decided to tiptoe my way down memory lane and give you a list of books that I loved in middle/high school.  Now, we’re talking books that came out 6-10 years ago, so feel free to laugh or reminisce along with me.  #nostagliahigh  #vampsarecoolagain 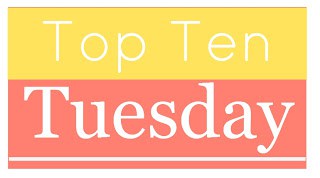 I remember buying this book at like, Walmart and then coming home and devouring it.  I loved the fantasy world it created and how it was based on the story of King Arthur.  (It’s not even subtle about it, either.  The main character is named Arthur Penhaligon.)  It was inventive and fun, which I definitely loved.

2. A Great and Terrible Beauty by Libba Bray

Ok seriously, who doesn’t love this book?  I read this in 7th grade and became obsessed with it, to the point where I was trying to determine which of my friends fit the different characters.  I have always loved historical fictions anyway, but throw in some magic and Greek mythology?  Goner.  Love at first sight.

3. The Book Thief by Markus Zusak

The funny thing about this book is that I don’t even remember the first time I read it, probably because I’ve read it three more times after that.  But it’s such a beautiful story.  Liesl is a darling and I will never not cry at the ending.

4. The Fallen by Thomas E. Sniegoski

This story introduced me to the cool world of angels and nephilim when I was in high school.  It was awesome.  Tack on the fact that they made a movie of it around the same time I found the book and I was sold.  Ever since this book, I’ve loved finding books about angels, this fight between good and evil that takes on a moral/religious subtext.  It’s a strange category of story, but I’m so taken with this series.

5. The Historian by Elizabeth Kostova

What a weird story this one was!  A narrator that doesn’t have a name and a massive search to uncover secrets about her mother.  I don’t want to say too much about it if you haven’t read it because the twists are worth it, but it didn’t go the way I thought it would at all.  It gets weird.  And we know how I love weird.  Now imagine me trying to explain this book to my sophomore English teacher.  I still don’t know how I pulled that off.

Another book about history and magic!  In high school, I was kind of obsessed with the Salem Witch Trials.  While this isn’t a Salem story, it does have many similarities.  A witch hunt, an innocent girl, those kinds of things.  I adored this story and I devoured its sequel with equal gusto.

7. The Haunting of Alaizabel Cray by Chris Wooding

This was probably my first foray into the horror genre, and boy was it interesting!  Also semi-historical, it dealt with demons and possession.  I probably read this at least twice in high school because it was so good.  But weird.  Definitely weird.

8. The Host by Stephenie Meyer

Thought I was going to include a different Stephenie Meyer book, didn’t you?  Sure, I enjoyed Twilight, but I loved The Host.  The love triangle between Wanderer, Jared, and Ian was so much better than the one between Bella, Edward, and Jacob.  This book elicited so many different emotions from me.  I absolutely love rereading the parts where Wanderer first stumbles into their camp and is basically quarantined.  I get super into those feelings of loneliness and fear…which it now occurs to me sounds really weird when I type that out.  It’s relatable is all I’m saying.  You go somewhere new and you don’t know how people will react.  Ok, moving on.

Favorite vamp series.  Bar none.  Seriously, how can you not love Rose’s sass and Dimitri’s duster and love of Westerns?  I’m swooning again.

10. Jessica’s Guide to Dating on the Dark Side by Beth Fantasky

I almost feel like this is a weird inclusion on this list, but I loved this book.  I still have it on my shelf because I can’t part with the good memories from it.  Jessica is feisty and she wants nothing to do with the vamp who ends up on her doorstep, telling her she’s a vampire princess.  It’s funny and sharp with many moments that made me hold my breath to see what would happen next.

3 thoughts on “Top Ten Tuesday: Back to School Freebie”