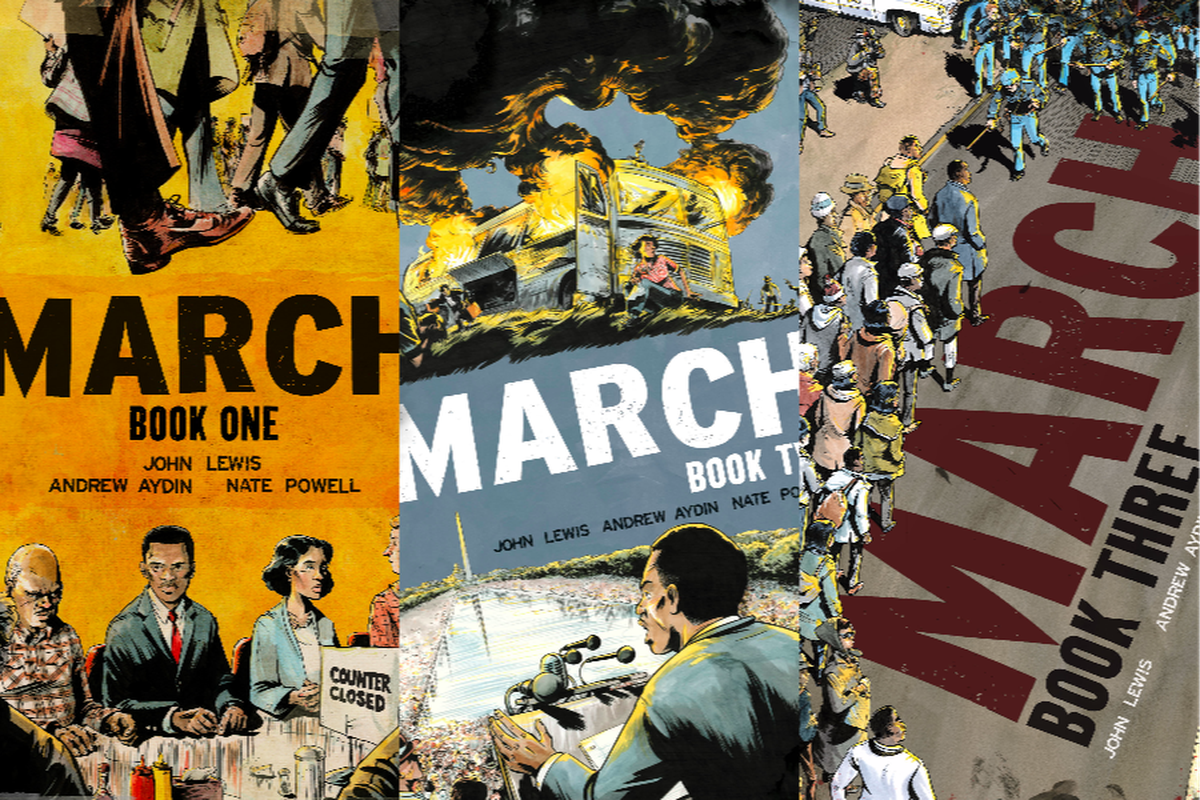 So over the weekend, I actually read all three of these.  And since they’re so similar, I didn’t think it made sense to give each of them a different review when I was going to say the same things over and over.  I thought it would be better just to tell you about the whole series at once.

Congressman John Lewis was a key figure in the Civil Rights Movement.  He committed to nonviolence in the 60s, fighting everything from segregated lunch counters to African-Americans’ right to vote.  From the days of Jim Crow and segregation to the present, Lewis has steadfastly fought for what he thinks is right.  Now, he shares his story.

In case you didn’t pick up on it, this is a nonfiction graphic novel series.  Lewis tells his story and shows you everything he and others went through in their fight for equality.  I’m sure some things have been slightly edited or changed simply because who’s going to remember every detail 50 years later?  I can barely remember what I ate yesterday.

But for the most part, this is an incredible and emotional look at the Civil Rights Movement.  Obviously, most of us grew up learning about it in the context of Martin Luther King and possibly Malcolm X, as well as a few scattered other pieces of history.  I’d only known about John Lewis as a Congressman who knew King.  (I think someone interviewed him on TV at some point in the last few years and that’s how I knew that.)  That’s basically all I knew about him.

Lewis…I can’t say just how much I now respect this man.  He fought for so much without losing himself or his values along the way.  It’s simply incredible.

Book 1 begins with Lewis’s upbringing in rural Alabama, continuing on to his joining a nonviolent movement, protesting segregated lunch counters, meeting MLK, and more protests.  I found this story to be a bit more amusing than the later ones.  (For example, Lewis wanted to be a preacher, so he practiced his sermons on chickens.  And it’s drawn in great detail.)

Book 2 gets more serious.  While Lewis and the nonviolent movement have had some successes, the violence against them is increasing.  This book includes Freedom Rides, police brutality, the Kennedys, and some of the biggest movers and shakers of the Civil Rights Movement coming together to coordinate their efforts.  This one really started to drill home how much people in the South did not want to integrate.  No better example of this than Bull Connor, a police chief who would literally do anything to stop the protesters.

Book 3 is, of course, the most harrowing of them all.  Bombings, murder, assassinations, injustice, and the quest to give everyone the right to vote as the Constitution ensures.  This one is a little more political because, now that the movement has grown so much, they’re trying to make more sweeping changes that can only happen through legal means.  And, of course, they want to make sure they’re fighting as much as they can legally to make sure these injustices can’t continue.

I love that these books speak on so many levels.  There’s this overwhelming theme of equality, whether you’re male or female, Black or White, American or something else.  Yes, it’s absolutely a tale of the Civil Rights Movement, and I don’t want to diminish that in any way.  This is a Big Deal and can easily be looked at just through that lens (as I mostly did).  But Lewis’s conviction that inequality and injustice should always be fought so easily translates to anyone else fighting for the same rights he fought for over 50 years ago.

I don’t often read graphic novels, so I can’t comment too much on the artwork, but I will say that it was easy to follow and the story made sense.  I think there were some times they may have dropped the plot a little just because there was so much going on, but it generally worked.

And I think a graphic novel was probably the perfect medium for this story.  It’s one thing to read about the treatment these protesters received at the hands of citizens, vigilantes, and police; it’s another to see depictions of burned out cars, wounds, and explosions.  It’s more emotional that way.  And I think this makes the story more accessible to audiences.

Seriously, everyone needs to read this series.  If I could, I would teach it in my class.