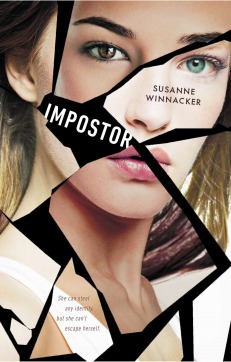 First Lines: (um….I returned this book to the library without getting the first lines, guys…whoops…my bad)

This has been on my to-read list since 2013, when it came out.  One way or another, it works its way to the top of my “Hey, you should probably read this eventually” list.  So I grabbed it (finally) and gave it a shot.

Tessa is a Variant, or a person with a genetic variation that gives her something similar to a super power.  For Tessa, this means being able to absorb the DNA of a person and mimic their appearance.  After being shunned from her family for her abilities, she’s been training with a secret branch of the FBI called the Forces with Extraordinary Abilities.  When a serial killer strikes in Oregon, Tessa is given her first mission: impersonate Madison, a normal teen, before the killer strikes again.  Tessa hates everything about impersonating another person, but she loves being a normal teen for once in her life.  Because, as Madison, she learns what friendship is, what family means, and a little romance.  But the clock is ticking and if Tessa isn’t clever enough, she may be the next victim.

This turned out being better than I thought it would be. When I started this, I thought it was so slow. It wasn’t going anywhere, it was super cheesy, and I couldn’t connect with the characters. But it got better.

At first, I wasn’t sure what was going on with this whole Variants thing. It throws you right in and expects you to just figure everything out, which takes a while (though it does avoid a weird info-dump). It was probably close to 70-100 pages before I felt like I had a grasp on the story, and I know a lot of people won’t hang in there that long.

Surprisingly, the mystery was actually pretty good. I mean, it’s not exactly impossible to guess the culprit (he/she made my suspect list), but it didn’t exactly go the way I thought it would. And that kept me reading.

I also eventually got pulled into Tessa’s character as well. Here’s a girl on a mission to infiltrate a family and pretend to be their daughter without anyone noticing the differences. It’s challenging mentally, but the emotional side of it blindsided Tessa, and I liked how that played out. Once I had that connection to the story, I was invested.

There is, admittedly, quite a bit of cliche and eye-roll worthy writing. This book is more than a few years old, and it heralds back to more cliche YA writing, where there are love triangles, BFFs to the death, and other YA tropes that I sometimes struggle with. I guess I’m not saying this as well as I’d like, but there were definitely points where I wished the writing was better.

Still, the surprise was good and there’s something of a cliffhanger that I kind of want to read the next book to learn how it gets resolved.