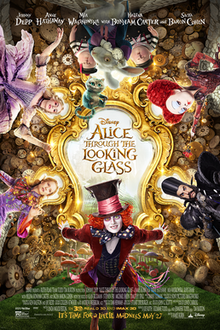 This spring, it’s time for a little madness.

So, while I knit, I like to just turn on movies and pass the time that way.  This movie was one I noticed on Netflix a while ago but didn’t want to watch at the time.  And for some reason, this just got stuck in my head.  This time, I wanted to see it.

For the past few years, Alice has been captaining her own ship and exploring the world.  But upon returning home, she sees how much things have changed–and she learns that Hatter is dreadfully ill.  Determined to help her friend, she returns to Underland to save Hatter and to defeat the Red Queen and her companion, Time.  But this is easier said than done.

This movie brings back the entire star-studded cast from the first movie, though this time it’s not directed by the delightfully weird Tim Burton (who is instead a producer).  But we have the return of the talented Helena Bonham Carter (Red Queen), Johnny Depp (Mad Hatter), Anne Hathaway (White Queen), and Mia Wasikowska (Alice).  This was also the last role of the incomparable Alan Rickman (Absalom).  Bless that man.

We’re also introduced to a new character, Time, played convincingly by Sasha Baron Cohen.  He, like Depp, has a way of disappearing into his characters until they are indistinguishable.

There’s also a very small role in this by Andrew Scott, who is most well-known for his role as Moriarty in the BBC Sherlock series.  I legitimately gasped out loud when I saw him.  I may have even screamed a little, I’m not sure.

And with a cast as talented as them, the acting is certainly not an issue.  I felt that most everyone did a lovely job.  I was especially taken with Alice and the White Queen, but I will always always have a soft spot in my heart for the Hatter.  There is just something about that character, no matter what incarnation his comes in. 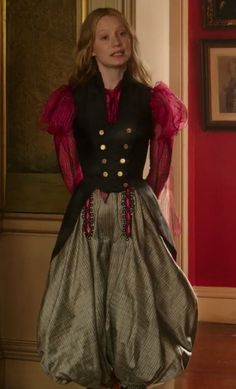 The costuming and scenery were all I could have ever hoped for.  Everything looked beautiful in its own insane way.  Underland is, as always, a wonder.  Everything seemed like it was tailored to fit the characters.  For example, this outfit Alice wears is perfect for her.  It fits her time period with the ruffles and the buttons, but it’s also distinctly Alice.  She’s wearing pants rather than a skirt.  (Yes, those are pants, but I think they are meant to give the illusion of a skirt at first glance.)  The pink is far too bright to have fit in with the time period.  (We’re talking normally more pastel colors and fuchsia is distinctly not pastel.)  It’s these kind of quirky twists on the ordinary that are so appealing.

However, I didn’t think the story was the greatest.  I thought the themes were fine.  Family, forgiveness, being true to yourself.  All of those are fantastic things, especially in a “children’s” movie.  (Technically, I think this is a children’s movie, but…it’s Alice.)

Anyway, the plot just seemed odd.  And not Underland odd.  The Hatter is convinced his family is alive whereas everyone else knows they are dead.  So Alice needs to go back in time to rescue them.  The reasonings behind everything she does and the outcome of it all just sort of fell flat.  It wasn’t as interesting as I was hoping it would be.

But that doesn’t mean the entire story is bad and this movie is a wash.  It’s still incredibly funny.  There are brilliant time puns, given that one character is named Time.  But my favorite joke is this one where Alice says she’s been traveling the world and a society girl asks her how it was.  Alice just stares at her and goes something like, “The world?  It was nice.  You should visit it sometime.”  I love that kind of biting, backhanded humor.  And this movie is full of it.  It’s clever humor.

It was a fun movie to have on while I was knitting, but overall?  It probably wasn’t as good as I was hoping for.