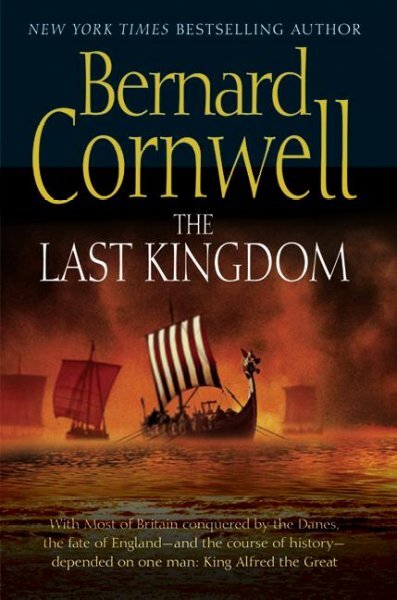 Ok, so I’m posting this because I told you guys that I was going to read it after seeing the Netflix show.  Luckily, my local library had it on the shelves and I could just quickly nab it.

This is the story of Uhtred, a young nobleman kidnapped by the Danes as a child and raised by them.  Years later, as the Northmen begin their invasion of Wessex, Uhtred virtually thinks of himself as a Dane.  He has no love for King Alfred of Wessex, who is pious and sickly, but when Uhtred unexpectedly defeats the Danes and the people he cared about turn on him, Uhtred is forced to choose a side.  As a young man, Uhtred’s only desire is to reclaim his homeland for himself.  But fate is everything and it’s never that simple…

Whether it was because I saw the show first or because of the author’s writing style, something made this seem like an attempt at fan-fiction.

I was glad to see the show actually did stay pretty close to the source material, with a few variations that were clearly done for the sake of time. It also meant I knew pretty much exactly how this book would go, so there is that.

I didn’t feel like Uhtred’s character was very well established in this, not like he is in the opening episodes of the show. (And I do hate that I’m constantly bringing up the show in this review, but it was just so good.) I had a hard time getting a grasp on him because I think he’s supposed to be more of this renegade, this bad boy with a good heart, but he just seemed kind of bland and stupid (by his own admission) in this book. There wasn’t a whole lot of personality here.

And part of that, I think, is because there isn’t a whole lot of dialogue. There’s some, but the story seems to be told from a much older Uhtred’s perspective as he looks back on his life. And it reads that way, with lots of descriptions and personal reactions but not as much dialogue as I would like in order to understand the characters better.

This story did write battle scenes well. I mean, they are descriptive enough that you can see the fight scenes in your head and really get a visual on how gruesome warfare used to be, but it wasn’t over-the-top disgusting. So that was well done.

I still plan on reading more in this series, but I had just expected…more.