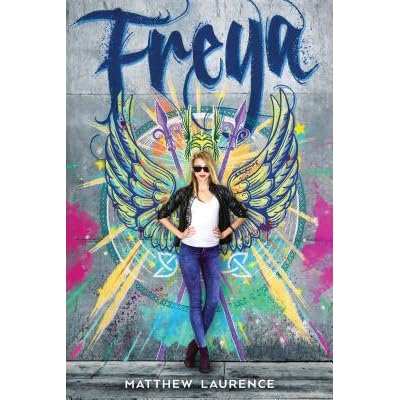 First Lines: I live in a mental hospital.  I’m not actually crazy; I just like it here.  The Inward Care Center has a lot going for it.  They give you clean clothes and neat slippers, feed you, and protect you, and nobody questions the bizarre.

Ok, so this was a book I had never heard of before.  I was walking through my library and thanks to The Last Kingdom, I’m more interested in Norse Mythology now.  A book about Freya?  I was willing to try it.  And let’s not forget to mention that this cover is absolutely awesome.  I love the bright colors, graffiti, and the absolute sass rolling off that model.  If the book was anything like the cover, I was in.

Sara Vanadi is more than she appears.  In her hey-day, she was Freya, goddess of love, beauty, war, and death.  But because of the direction the modern world has taken, she’s largely forgotten.  Believers are hard to come by, which really sucks when your power comes from believers.  She’s been laying low for decades when a corporation comes to her with a deal: join us and receive power and believers–or refuse and die.  It’s a tough decision for Sara to make, so she chooses neither and escapes with her new friend, Nathan.  With the power of humans growing so greatly that they are determined to control the divine, Sara knows she needs to fight back.  But first she needs real clothes.

I vastly enjoyed that. It was funny and exciting and suspenseful and interesting.

Sara and the other gods are delightfully flawed, but I’ll speak about Sara since she’s the main character. So even though (or perhaps because) she’s a goddess, she’s got a lot of flaws. She’s short-sighted, vengeful, impatient, and brutal toward enemies. But she’s also witty, clever, and able to analyze a situation from multiple angles in seconds. You really do start to like her from the very beginning despite her flaws. And it was actually fun to read about a character who was that flawed and really didn’t care. She wasn’t ever really questioning her decisions. If she made a mistake, she shrugged it off and kept going. It was kind of awesome.

Also, she’s incredibly sassy.  I adore that in characters, and this was great.  Her wit and cleverness really come out in her sass.

My one qualm with this book was her pal, Nathan. For being a main character, he is decidedly one-dimensional. I mean, even the villains feel almost three-dimensional but her best friend is flat? What kind of sense does that make? Nathan was a window dressing in this story, there for good looks and when Sara needed him. That was about it. I wish he’d had more of a role, or at least that we could see more about him.

The plot/premise is absolutely ridiculous and I loved every second of it. I mean, there’s an agency that collects old gods and goddesses? Ok, sure. Sara wants to go into hiding from them? Totally get that survival feeling. So where does Sara go to hide? Disney World. It’s just fantastic and so so funny.  And it makes some wicked good sense the whole time.  I loved the absurd feeling of the whole thing.

The action is definitely worth it. There are excellent fight scenes, there’s a lot of espionage and intrigue, and there’s a lot of set-up early on to stuff to come later and you just know it’s going to be good. I stayed up late to finish this book because I started getting to the really good stuff just before midnight. When there’s that much action, you can’t just put it down and pick it up tomorrow. That ruins the fun.

Anyway, this was absolutely delightful. I really enjoyed this.  And I’m really looking forward to the sequel, which promises to be equally ridiculous, and really, there are some days when you just need that complete lack of rationality.