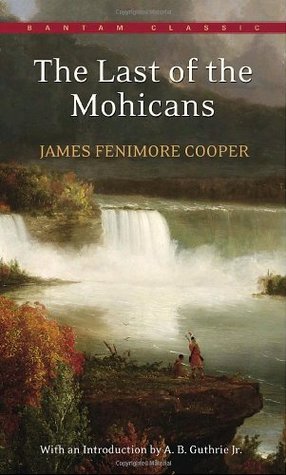 First Lines: It was a feature peculiar to the colonial wars of North America, that the toils and dangers of the wilderness were to be encountered before the adverse hosts could meet.

At the beginning of this summer I was obsessed with reading classics that were on the Great American Read from PBS.  So I went to my local Barnes and Noble and bought a bunch of their classics.  (TIP: B&N has their classics on sale all summer for $5 each if you buy 2.)  The first of those I read was this one…which naturally isn’t even on the GAR list.  But I wanted to read it.

During the fierce French and Indian War, young women Cora and Alice Munro, with the help of a young commander named Duncan, are trying to get from one fort to another where their father is.  However, things quickly don’t go as planned and they must rely on the help of strangers in the woods.  They are a scout named Hawkeye who has forsaken life as a white man, his native friend Chingachgook, and Chingachgook’s son Uncas.  In the wilds of upstate New York in 1757, the world is not a peaceful place.  Danger lurks everywhere and they have vastly underestimated their enemies.

I was a little bit peeved by the role of the women, Cora and Alice. I mean, I completely understand the time period in which this story is set (1757) and the time in which it was written (1826). I get it. And I really did enjoy that Cora was quite brave and willing to stand up to enemies on her own. It just bothered me that Alice was constantly fainting or crying every time anything bad happened and that Alice was the one everyone seemed to prefer, even though she had no personality whatsoever. I’d be or befriend Cora any day of the week.  The girl’s like a colonial American incarnation of Tris Prior from Divergent.  She rarely backed down and I thought that was awesome that she was written that way.

Speaking of the time in which this was written, yes, there are moments that can be racist. What’s ironic is that I was actually expecting it to be worse. I was pleasantly surprised to find that there were a lot of moments in this that seemed pretty balanced in terms of white vs. native. There are many scenes where the Natives explain their anger, how they’re tired of being pushed from their homeland by the “pale-faces”. There are times where white characters like Hawkeye willingly admit that they don’t understand nature in the same way that Uncas and other natives do. But yes, there were other moments of stereotypes and general racism that did permeate the story.  White men are basically always in charge, all the time.  Even within groups of Natives, which doesn’t make a whole lot of sense, you know?

The writing style is pretty typical of the time. Flowery descriptions to the point, I would argue, of excess. Unnatural dialogue that suggests over-politeness. Referring to characters by 3-4 different names apiece. It can get a little heavy to read. I won’t lie; during some of the longer paragraphs of that I tended to skim a little just to stay with the story. Some of it was really interesting, but it was hard to keep the flow of a battle scene when suddenly there were two pages about the forest around it.

Still, as a look at colonial America written during America’s first 50 years as a country by someone who lived in it, there’s an authenticity to it that you really can’t fake. And I did genuinely like the plot.

I would rate this 3.5 if I could because I thought it was better than other books I’ve read at a 3, but I didn’t like it enough to give it a 4.