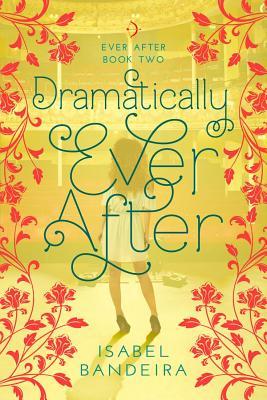 First Lines: My last word echoed just slightly in the bathroom-turned-recording studio and, when I looked up, Phoebe and Grace were looking at me with identical expressions of awe.

I am always game for a cute contemporary romance, so when this series caught my eye a few weeks ago, I continued the love with this second installment.

Senior year is shaping up to not be the dreamy, amazing year Em Katsaros wanted it to be.  With her leading man five thousand miles away in Germany and her dad getting laid off his job, Em is struggling.  Especially since her dreams of becoming a famous actress will die if she can’t get a scholarship to study acting in college.  In the hopes of turning things around, Em enters a speech contest and wins a spot for herself at the US Youth Change Council national round.  She’ll spend a week in Boston and, if she wins, come home with a huge scholarship.  Everything’s great until Em’s nemesis, the egotistical and stuck-up class president Kris Lambert, is also going.  Weirdly, Kris is being nice in Boston.  But Em knows this game–lull the enemy into comfort and then strike.  So Em decides to beat him at his own game and ups her flirting and niceness.  Only, soon it’s hard to remember what’s acting and what’s real.

So far, I’m finding this series rather adorable.

While it’s solidly YA contemporary romance and packed full of fun cliches, there’s something about each of these books that has felt new, in its own way.

In this book, Em is entering into a speech competition for a scholarship she desperately needs to prove to her parents that the arts are what she wants to study–not getting a safety job in accounting or business or whatever other idea they come up with. She’s dramatic and confident on stage. But off stage, she’s self-conscious and afraid. She’s something of a perfectionist, and when she gets stressed, she micromanages the lives of those around her to feel in control.

In other words, Em is very flawed. But I did like seeing some of her better qualities. Her passion for history, her desire to help others in small scale ways, her ability to fight for what she believes in. She was kind of awesome, and not in small part because she is so flawed.

The story itself sometimes gets a little slow, simply because most of it is focused on Em’s fears about the competition, college, Kris, etc. But it was still a cute story.

There are also some really interesting themes in this, particularly about who we are and who we want to be.  This is a Youth Change Council, after all.  The whole contest is about how people can change the world, in one way or another.  So there’s a lot there about humanitarian work, government, art, etc.

Oh, and the history!  Em is a huge history buff, like me, and being in Boston is #NerdParadise for the both of us.  It was so cool to see her reacting to the history around her in the same way I wanted to.

I just found this book to be adorable and I can’t stop saying that over and over.