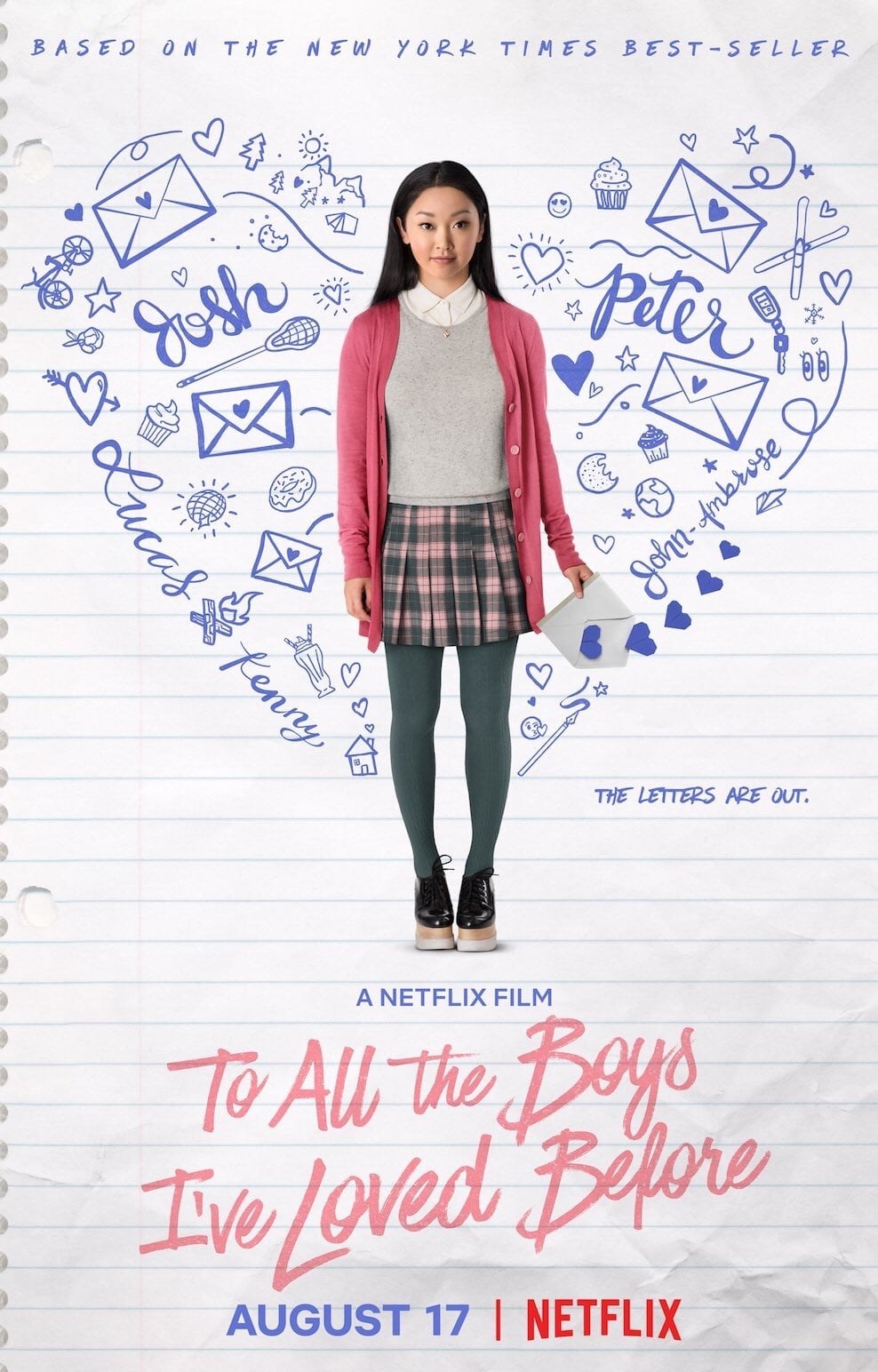 The letters are out.

This has gotten so much hype so quickly that I had to see what it was about.  I mean, not that I didn’t know.  I read the book years ago when it first came out, so I knew the plot.  But every YA author was all over Twitter spreading love and I needed to check it out.

In case you don’t know, Lara Jean Covey writes letters.  Ok, she only writes letters to her crushes when the feelings are so overwhelming that she doesn’t know what to do with them.  She never intended for them to be seen.  They were a way for her to deal with her feelings.  But when the letters get sent out by mistake, Lara Jean quickly finds herself caught up in trouble she never wanted.  When one of the boys pretends to be her boyfriend to save her from some of this trouble (and helps him get back with his ex), Lara Jean thinks it’s the perfect deal.  Until the feelings may not be pretend anymore, at least.

In a nutshell, it’s cute.  I’m thrilled at the diversity of Lara Jean’s half-Korean family (her dad’s white, her mom Korean) and all that came with that.  I thought the story was intriguing and I got sucked in even though I was initially doing other things when it started.

Lara Jean is the girl I think many of us might have been in high school.  She has one best friend, but mostly spends time with her sisters and stays home.  It’s all she needs.  She’s messy and shy and lives by the rules she sets for herself.  (She makes her fake boyfriend sign a contract!)  But perhaps my favorite trait of Lara Jean’s is that she is terrified of driving.  Praise the angels, there’s finally a character like me!  At 16, the last thing I wanted was the responsibility of handling a multi-ton vehicle that put my life–and others–in jeopardy every time I was on the road.  I’ve never seen another character like that and I’m so thrilled that Lara Jean was able to represent me in that way.

The plot, as I mentioned, is cute.  Lara Jean is stuck in a hard place, as one of the letters that went out was to her sister’s ex-boyfriend that Lara Jean had been crushing on for years.  Um…oops?  Watching her dodge that but also getting into hi-jinx with her fake boyfriend was just fun.  It was pretty light-hearted and funny most of the time.

But it definitely gets deep too. Death, abandonment, rumors, and bullying all play a role in this.  And it deals with them in a way that’s definitely respectable.  It didn’t feel like it was the “adult” response to these things, but it felt like teens trying to muddle through the best they could.  And that was pure and real.

And now we come to my single complaint of this movie: it’s not for younger viewers.

A coworker of mine is of Persian descent.  Her girls are half Persian and half white.  She’s constantly looking for movies and books for younger teens (7th and 9th grade) with a minority lead so they have representation.  I initially told her this might be a good choice.

I was wrong.  And I hate that she can’t show this to her girls.  (Also, they’re the type of girls who would self-censor, so it’s not entirely because their mother’s fault.)  Sex jokes, mentions of porn, and some strong language all make this perhaps not the best choice for younger teens.  I know some younger teens will watch it regardless, but I’m frustrated that YA as a genre (books and movies) seems to be making the main characters more/too mature for their ages.  It used to be that I couldn’t find YA books for older teens, but now I can’t find YA that’s appropriate for middle school, like I grew up with.

And I know that I can’t fault this movie too much for following the trend.  I promise I won’t take it out on this movie.  But I’m frustrated.  (Side note: if you know of any YA books with minority leads that are appropriate for middle school, leave a comment and you will have my eternal gratitude if not my soul to boot.)

Ahem.  As I was saying, this movie as a whole is quite cute.  The love story is adorable, Lara Jean is charmingly quirky, and it’s quite funny.  Just don’t maybe let the little ones watch it unless you want to explain what some things mean.