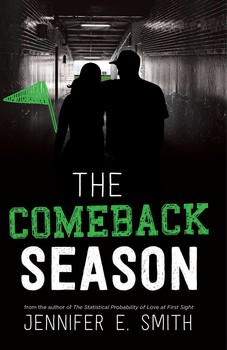 First Lines: Opening Day at Wrigley Field isn’t always April 8.  It’s not like Christmas or the Fourth of July, with their dependable calendar slots, the reassurance of a fixed number.

This poor book has been languishing on my Goodreads since 2009.  Yes, 2009.  And it’s probably been living on my bookshelves since like 2015 or so.  I don’t even remember how I got it and I remember how I got almost every book on my shelves.  So…I decided it was probably time to read it, you know?  And while I’m not a huge baseball fan or a Chicago Cubs fan, I do understand sports fanatics, seeing as I am one for NFL football.

Ryan Walsh should be in class.  She should be anywhere but at Wrigley Field on opening day, to be honest, but here she is, skipping school to watch the Cubbies.  It doesn’t matter that she should be worried about failing classes or that this is the first time in five years she actually might be happy.  She’s finally returning to the place her father loved so much.  And this, the fifth anniversary of his death, seems like a fitting memorial.  Good luck is often rare at Wrigley, but it’s there Ryan meets Nick, the new kid at her school who loves the Cubs as much as she does.  But Nick carries a heavy secret that makes Ryan wonder if hope is dangerous and that this may not be the comeback season she was waiting for.

Being a Midwesterner myself (though not a Cubs fan), I am very familiar with Cubbies culture, being a fan of a team with a yearly losing record, and life in the Midwest. It was nice to see so many things in it that I could relate to.

For probably 4/5 of the story, I was totally with it. It started a little slow getting to know Ryan and Nick (the third person narrator didn’t always help that), but once we were following them for a decent amount of time, I liked them. Ryan is still mourning the death of her father, who was her hero and died five years ago. Nick is new to school, slightly popular, but finds a kindred soul in Ryan as they partner up to do a math project about the Cubs. But both of them are keeping secrets, things that are easier to pretend aren’t true when they’re with each other.

The story was interesting, a little on the slow side, but it kept me reading. The only part of the whole thing that lost me was the ending. It was so ambiguous that I wasn’t actually sure what happened and that really bothered me. Ambiguity can be a good thing, but there was too much of it here.  Ok, like, you remember in The Fault in Our Stars how Hazel and Gus were worked up about the ending of their favorite book and go to Amsterdam to meet the author to ask about it?  Because he just stopped it so abruptly, like in the middle of a sentence or something weird like that?  This was kind of like that, though there was, at least marginally, more closure than that.

A number of topics are covered in this and I thought they were well done. There was something sweet about this book while being tied down by some very heavy topics.