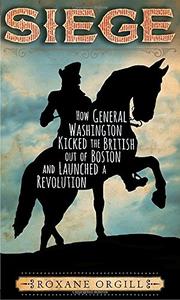 This is a little different.  I bought this from Scholastic for my classroom, thinking it was nonfiction.  It’s not–it’s actually a lyric novel.  Color me surprised.

Anywho, it’s basically exactly what it advertises itself to be: a (lyrical) book about the siege of Boston in 1775 that more or less kicked off the American Revolution.  Narration bounces between Washington, the Boston newspaper, Washington’s commands, British officers, and others.

I’m a huge Revolutionary buff, so this fit my wheelhouse well. I thought it was an interesting and different way of looking at history, by making it lyrical and turning it all into poetry. It definitely made for a fast read.

It’s just that it seemed to cover so little. I mean, Washington and his aide-de-camp Joseph Reed were really the biggest characters in this. There were appearances by others like General Howe and Abigail Adams, but they were minor characters. More time was spent on Washington’s orders than on other characters.

It’s a catch-22. If you make it lyrical, you have to leave things out. But to put everything in, and still be lyrical, the book would be mammoth.  (Side note: a great lyrical historical fiction novel is The Watch That Ends the Night about the sinking of the Titanic.  I adore it.)

Still, it was a good read.