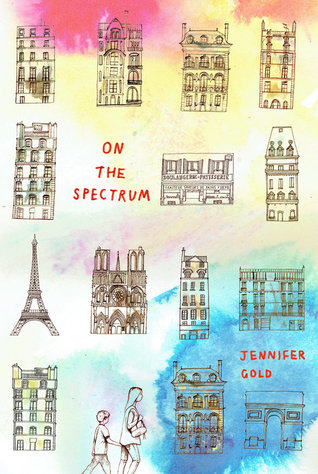 First Lines: When I was four, my mother dressed me up for Halloween in a miniature tutu and pinned my still-fine baby hair on top of my head in a tight knot that matched her own.

The coincidence of me posting this today, when my school is raising awareness about autism, is making me feel all warm inside.  Ok, initially I grabbed this for one reason: Paris.  But I was quickly hooked on the idea of an autistic character and seeing how he sees the world.

Clara is the daughter of a world-class ballerina–and because of that, she’s never been good enough.  Never been skinny enough.  At 16, she has an unhealthy obsession with healthy eating and measuring out every single thing that enters her body.  After a social media disaster, Clara decides it’s best if she goes away for a while and moves to Paris to stay with her estranged dad for the summer.  This includes moving in with his new wife and Clara’s half-brother, Alastair, who is six and on the spectrum.  Put in charge of her brother, Clara and Alastair journey through Paris and see the sights.  And while Alastair is teaching Clara patience and to love without judgement, Clara may also be learning what it means to love–herself and others.

This was just beautiful. And maybe it was a case of right book, right time because it was very different from what I’ve been reading.

Clara and Alastair were so unique and special in their own ways. Alastair just doesn’t understand social cues, sarcasm, or humor. At 6, he’s old enough that he’s getting bullied by other kids for being different and he doesn’t understand why he can’t be accepted. Clara, at 16, knows how to fit in, though her push for perfection in her body has given her an eating disorder (though not the ones you’re thinking of). For the summer, Clara gets to know her little half-brother and help him through his issues while trying to sort through her own.

It’s an interesting look at so many different things, not just autism and eating disorders. There’s also bits about racism and societal pressures. It’s never preachy, never becomes overwhelming. It was all about how it fit into the story with the characters. Like Clara’s disorder isn’t always the focus, nor is Alastair’s autism. Sometimes the issues are as simple as figuring out how to talk to the dad you barely know.

This book moved me.  It reached inside to my heart and slowly turned it into this little pile of mush.  These characters (and many of the scenes in the story) have stuck with me long after I finished this book.  It was beautiful.

It was just sweet. And different. I really liked it.