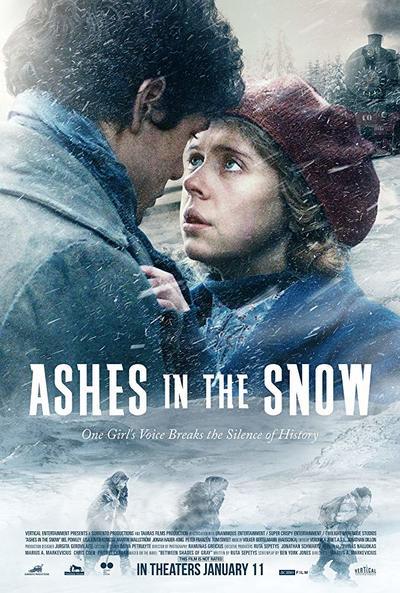 This is the movie adaptation of Ruta Sepetys’s Between Shades of Gray novel.  I saw the trailer for this a few months ago and completely freaked out.  This is one of those books I reread every couple of years and I love it so much.  So to have a movie on it?  I’m in.  But it didn’t have a wide release and I found it on accident on a streaming service my library has.

If you’re unfamiliar with the story, Lina is a young girl growing up in Lithuanian in 1941, just as Stalin is invading most of Eastern Europe.  Her family is taken by the NKVD and sent to various work camps in the heart of the Soviet Union.  With her father separated from them, Lina tries to hold on to hope that she’ll see him again while struggling to survive.  It’s a journey spanning years, but if Lina’s going to survive, she’s going to need all the help–and hope–she can get.

I want to say that before I watched this, I saw a review that warned me die-hard fans were going to be disappointed because the movie changed things.  That was my attitude going into watching this.

I don’t want to say that I was disappointed, though.  Obviously, I knew events would have to be changed for the movie.  Time constrictions being what they are, obviously things are cut.

But the movie was…kind of weird.

First of all, and I’m not entirely sure why this unsettled me so much, there’s no voice-over narrator.  As events happen, there’s no narrator explaining what’s going on or what Lina’s feeling.  And I get that these events are chaotic and that needs to be shown, but I was wigged out about the lack of narrator.  I think it’s because there were long stretches of unexpected silence, and that doesn’t happen very often in movies.

And the plot was actually really true to the book, with the exception of leaving things out.  For the most part, I was able to mentally check off what was going to happen next and I knew where we were in the book.  I thought some parts were going to be different to avoid showing some of the brutality (the movie’s rated PG-13), but actually, it was more brutal and disturbing than I thought it would be.  It does not shy away from some of the realities of their situation.

What was a little different were the roles of Lina’s mother Elena and Nikolai Kretzsky.  In the book, Lina is our only narrator.  In the movie, we see events where something happens to Elena or where Kretzsky is with the other commanders and Lina is nowhere in sight.  In a way, I liked that.  I liked seeing some of the events that the book only alludes to because Lina isn’t there to see it happen.  But some of Kretzsky’s scenes are the most disturbing of the entire movie.

The one thing I was disappointed with was how small of a role Andrius had.  I know he’s not the most prominent person in the book, but he’s a vital character.  And here…he’s not.  That would be one thing I would change.

It wasn’t the most faithful or the best adaptation of a book that I’ve seen.  But it wasn’t bad.  Events that readers adore and/or remember are there.  The pocket watch.  Ona.  Drawing the Commander.  The grueling train ride.  It was nice to see a lot of these moments brought to life, but I kind of think maybe I’ve read this book too many times to be enamored with the movie.  I have solidified my own mental pictures of scenes.