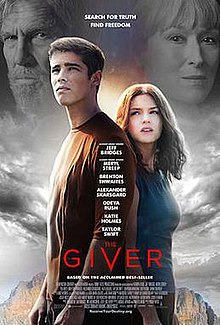 So like a week or two ago, I posted my review of the book The Giver.  To sum it up, I didn’t really care for it.  But I wanted to give the movie a try because, since I gave this as an option for my students, I needed to see what the differences were to catch cheaters.  But also because there’s a pretty all-star cast in this.

After The Ruin, there emerges a community run by Elders.  No one has choice.  It’s a colorless, emotionless world ruled instead by logic and sameness.  But when Jonas is selected to become the new Receiver, he finds out the world used to be so much more vibrant.  And when he starts to discover threats to his family, he’ll go to any length to protect them.  Even as the Chief Elder tries to stop him.

I don’t say this very often, but I actually liked this better than I liked the book.

I don’t mean I loved this, but it was exciting.  It was interesting.  And the changes between black/white and color was visually so helpful to understand the story in a way the book just couldn’t do.

In the movie, the characters’ ages have been increased.  In the book, they get their jobs at 12; in this, they’re 18.  I liked that they had that increased maturity because it made it a little more believable for me.  Jonas’s actions seemed more real.  I mean, we just don’t see 12-year-olds running off on their own the way he did, but an 18-year-old?  Yeah, I buy that.

And I liked the way the memories unfolded.  It was an interesting process and happened so much faster in the movie than the book, since we can see everything and not read 10 pages describing snow.  I liked how they were such common things to us and he reacted so differently.  I know that happens in the book, but…it’s just different when you can see it in front of you.

But I think what I liked most of all was how the Community was given more of a presence.  We see more about the Elders, more about their rules and borders.  I started to feel like I got more of an idea as to why the Community existed in the first place, rather than the book which kind of glosses over all of that.  I like understanding their history.  It finally gave the story more purpose.

Some of the acting I thought was really good, but it was kind of hard to tell with some of the others since they’re supposed to be so emotionless.  It’s hard to tell, for example, if Katie Holmes is actually a great actress or a terrible one because she’s not showing any emotion.  She’s not supposed to.  And in general, I hate that, being an emotional person myself.  But I thought our Jonas (played by Brenton Thwaites) was really good.  He got pretty into it.  And I liked Jeff Bridges as The Giver.  They were the heart of the movie.

For die-hard fans, I think this movie is problematic.  It doesn’t tend to follow the plot of the book much, though there are basic elements that I recognized.  But it is very different, as I was even told before I watched it.  Still, I thought those differences helped me get into the story easier.  It was fun to watch.