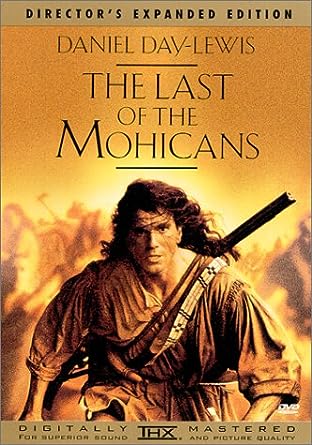 Hey everyone!  So last summer I was on a big kick about reading classics and The Last of the Mohicans by James Fenimore Cooper was one that I read.  And during one of my recent library visits, I saw they had this movie.  While I don’t remember a ton about the book anymore beyond the bare bones of it, I thought this would make for an entertaining night.

The basic gist of the story is that two young women, Cora and Alice, are trying to get to their father at a fort during the French and Indian War.  Danger surrounds them all the time, as the Huron and other tribes are constantly hiding in the forest, ready to attack.  With the help of Hawkeye and his Mohawk friends, Cora, Alice, and their British guard Hathaway try to survive the journey.  And not everyone will make it.

I’m going to start by talking about it from a purely movie standpoint, then we’ll compare it to the book.

As a movie, it was incredibly entertaining.  Action, betrayals, backstabbings, danger, romance, sacrifice, it had it all.  Daniel Day-Lewis as Hawkeye was fun to watch because he was (as Day-Lewis typically is) way into the role.  And I thought some of the other roles (Cora, Hathaway) were well-acted, though a bit overly melodramatic at times too.  That goes for Hawkeye as well.

It was full of action and, even though I try to watch things to do with colonial America and its class with native tribes, this is probably the first time I’ve actually seen what a scalping looks like.  That was a little gross, but very effective in showing why people were terrified of it.

And I thought it did a decent job of trying to show–and represent–native cultures.  They used actual Native Americans to play those roles and allowed them to speak their own languages in scenes.  (I saw on IMDb that this usually meant they were speaking to each other in different languages and they couldn’t understand each other.)  But other things, like anger toward the colonists, respect of nature, and even their tribe power structures were represented and I liked that.  I’m not going to say it was groundbreaking or anything–and I’m not Native American myself, so I have no authority here to speak for that.  I’m just saying I appreciated the representation, even if it still had some work to do.  (And part of that is the story’s fault, since the Natives are the aggressors in the story itself.)

Ok, compared to the book, there are a lot of differences.  There were times watching this where I was like, “Huh.  I don’t remember that happening.  Did that happen?”  (Again, I didn’t remember the book well to begin with.)  But again, IMDb helped me out.  Once I read that, I started remembering how certain scenes were supposed to play out.

This movie is kind of billed as a historical romance, which I can assure you the book was not.  That was probably the biggest twist.  The characters still generally fill their same roles, like Cora is the stronger of the girls and Alice is this fainting daisy all the time.

But the movie gave different outcomes to a lot of things.  I don’t want to spoil anything, but let’s just say that just because they survived in the book (if you’ve even read the book) does not necessarily mean they survive in the movie.  Those twists were actually fun because A) they were more unpredictable and B) they were daring.  I mean really daring.

This movie’s been out for 27 years and you can tell where it maybe hasn’t aged well.  Some of the special effects are ridiculous.  (There’s this one, early on, where they’re shooting an elk or something and you can tell it’s basically a plastic model they just threw down a hill.  I laughed out loud.)  Some of the cinematic choices are weird.  Camera angles that change in ways I’m not used to or seem to focus a little too long on something.  But honestly, it was kind of better than I expected.

It’s good to watch once, maybe twice.  It won’t be a favorite of mine by any means, but I’m glad I watched it.