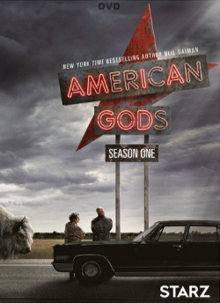 Hello everyone!  I found this at the library a few weeks ago and, being bored, I thought it might be a show worth watching.  I have not read the book, but I’m a fan of mythology and the idea of modernizing it, mixing these old gods with today’s world sounded fascinating.

Shadow Moon is a man with a dark past.  Now, his ultimate goal is to live a quiet life with his wife.  But when he gets word that his wife has died, his life is thrown into chaos.  As he flies home for the funeral, he meets the mysterious “Mr. Wednesday” who seems to know more about Shadow than he should.  Mr. Wednesday is insistent that something is coming and he needs Shadow to help him.  From this moment on, Shadow’s life will never be the same.

Oh my gosh, I don’t even know where to start with this.  This was fantastic.  I’m actually terrified to read the book now because I don’t know how it can possibly be better than the show.  The show is that good.

Being a STARZ show, this is definitely meant for *much* older viewers.  Profanity, nudity, and more abound.  There were moments when things happened that I didn’t even feel like I was old enough to be watching it.  And I don’t know about anyone else, but I would have been highly uncomfortable watching this show with another person.  It’s….graphic.

But let me tell you, the story is wonderfully told.  Even though the story isn’t exclusively told from Shadow’s perspective, we basically only know as much as he does the whole time.  So when weird things happen, we don’t understand it either.  When something shocking happens, we’re as shocked as he is.  There’s this air of mystery the entire show where you know enough to have a general idea but not enough to know everything until the end.  I loved that, the slow unravel of the story as we got to know the characters better.

The story is told from multiple perspectives, and by multiple, I mean probably close to a dozen when all is said and done.  There are 2 episodes of the 8 that completely take you out of the main narrative to explain something that happened in the past to show how we got to this point.  I actually really enjoyed those episodes.  But also, at the beginning of most episodes, we get a little bit of a look at the lives of people as they came to America (Norsemen, slaves, Hispanics, etc.) and the gods they believed in.

Ah, there’s still so much I want to say and I don’t want to forget anything!

Ok, characters/actors.  Look, these actors are phenomenal.  Particularly the guy (Ricky Whittle) playing Shadow.  He comes off as cold and aloof a lot of the time, but I always felt like even though he seemed so stoic, I knew exactly what he was thinking and feeling.  That’s impressive.  I was also a fan of Ian McShane as Mr. Wednesday and Pablo Schreiber as Mad Sweeney.  Emily Browning, who plays Laura, is so good as well.  The stuff she has to act through…man, there’s no prep for that.  And she played it so well.

This show really allows all of the characters to have their own quirks.  Mr. Wednesday is definitely quirky and sarcastic while Shadow is, as I said, kind of stoic.  But he’s also slow to make decisions and thoughtful about what he’s seeing around him, no matter how incredible it is.  Laura is selfish and completely self-centered to the point of cruelty.  Mad Sweeney is hilariously unlucky and there’s far more to him than meets the eye.  I loved watching all of these characters evolve throughout the story.

Social commentary.  There was so much about this that felt timely and politically charged.  (I was about to change my wording of “politically” but then I remembered about 4 different scenes that actually do seem political, so I’m leaving it.)  Some of it was horrifying, some of it was eye-opening, so of it was simply human nature.  All of it was relatable.  I thought it was fascinating, though admittedly there were a few that made me squirm or were just hard to watch because of how well it matches what’s on the news.

I really enjoyed this show.  I would have been able to post this a week ago except halfway through watching the show, someone put the DVD on hold and I had to return it for a time.  That was a long week, not being able to watch the final 3 episodes.

I was always into it.  And I was usually yelling at the TV too, like this:

I don’t normally watch dramas, but this was so much better than anything I’ve seen in a long time and I can’t wait to see Season 2.  It’s getting crazy up in here.