Hey everyone!  So I felt like I needed a little something extra to post about every week and I settled on focusing on writing.  Usually with this blog (and most others I see), we tend to focus on the characters, the plots, the conflicts, the themes, the books overall.  We rarely focus on the writing unless it’s bad.

I’ve been really moved by a lot of writing lately.  The complexities of it, the amazing metaphors writers come up with, etc.  I’ve been watching Songland on NBC (Tuesdays at 10!) about the songwriting process and I’ve got to say, every song I’ve heard on it has been beautiful.

On top of that, I just feel like writing in general is undervalued.  We should be celebrating authors that are amazing and who hit us square in the feels with a perfectly worded quote or advice or pose the question that just doesn’t leave us.

I’m going to have some fun with this.  I hope you will too. 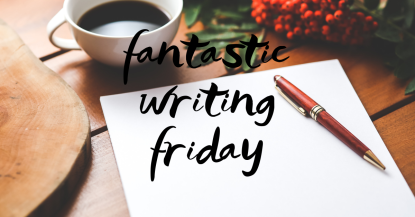 This week’s Fantastic Writer is…

This wasn’t even a question when I first actually sat down and started planning out this post.  Mafi’s quotes (especially from Juliette in any of the Shatter Me series) have always had a way of getting to me.  This one about loneliness painted such an amazing picture that I think about this a lot:

“Loneliness is a strange sort of thing.
It creeps on you, quiet and still, sits by your side in the dark, strokes by your hair as you sleep. It wraps itself around your bones, squeezing so tight you almost can’t breathe. It leaves lies in your heart, lies next to you at night, leaches the light out of every corner. It’s a constant companion, clasping your hand only to yank you down when you’re struggling to stand up.
You wake up in the morning and wonder who you are. You fail to fall asleep at night and tremble in your skin. You doubt you doubt you doubt.
do I
don’t I
should I
why won’t I
And even when you’re ready to let go. When you’re ready to break free. When you’re ready to be brand-new. Loneliness is an old friend stand beside you in the mirror, looking you in the eye, challenging you to live your life without it. You can’t find the words to fight yourself, to fight the words screaming that you’re not enough never enough never ever enough.
Loneliness is a bitter, wretched companion.
Sometimes it just won’t let go.”

Or this one about time:

“Killing time isn’t as difficult as it sounds.

I can shoot a hundred numbers through the chest and watch them bleed decimal points in the palm of my hand. I can rip the numbers off a clock and watch the hour hand tick tick tick its final tock just before I fall asleep. I can suffocate seconds just by holding my breath. I’ve been murdering minutes for hours and no one seems to mind.”

I haven’t read much that Mafi has done outside of the Shatter Me series, so that’s basically what I’m going to be basing this on.

What I love best about Mafi writing as Juliette is how she plays with language.  Both of these quotes personify abstract ideas in a way that makes them feel so different from how we’re used to thinking about them.  And I love that.  I love that loneliness feels jealous of success, that time is represented as mortal.  It’s fascinating how she’s put that all together.

She also plays with language in the way she frames some of her writing in a way that feels like poetry.  She doesn’t always use punctuation, especially when she’s trying to show a decline in Juliette’s mental state.  She also plays with the crossing out of words in the story to show what Juliette feels and how she’s editing it.  It’s so bizarre to see this that I fell in love with it pretty quickly because of how it helped enhance the characters.  Here’s an example of that poetry sound:

“He’s breathing like he’s lost his mind and he’s looking at me like something has broken inside of him, like he’s woken up to find that his nightmares were just that, that they never existed, that it was all just a bad dream that felt far too real but now he’s awake and he’s safe and everything is going to be okay and
I’m falling.
I’m falling apart and into his heart and I’m a disaster.”

As Mafi has gotten older, her writing has tended to be more thoughtful.  She relies more on those Big Questions that drive most of us in some way, how we look for those universal truths in literature.  Who am I?  What do I want?  What does real love look like?  In A Very Large Expanse of Sea, she really dives into those questions as she writes (in a fictional way) about what she and others endured as Muslim women after 9/11 and the ignorance many people showed them.  Here’s a quote from that book that moved me:

“The more I got to know people, the more I realized we were all just a bunch of frightened idiots walking around in the dark, bumping into each other and panicking for no reason at all.
So I started turning on a light.
I stopped thinking of people as mobs. Hordes. Faceless masses. I tried, really hard, to stop assuming I had people figured out, especially before I’d ever even spoken to them. I wasn’t great at this—and I’d probably have to work at it for the rest of my life—but I tried. I really did. It scared me to realize that I’d done to others exactly what I hadn’t wanted them to do to me: I made sweeping statements about who I thought they were and how they lived their lives; and I made broad generalizations about what I thought they were thinking, all the time.”

Mafi is a brilliant writer with stunning prose that leaves me captivated every time I pick up her books.  She twists language in ways that I didn’t know it could go and it makes me, as an English teacher, fangirl with delight as I read it.  Language is power and Mafi understands that.  Her metaphors are incredible and you end up seeing the world very differently after each book than you did before you started it.  That’s the sign of a powerful writer.

In the comments below, please leave your favorite Mafi quote!  What’s moved you?  (If you’re having trouble finding one, Goodreads has a lot of them!)