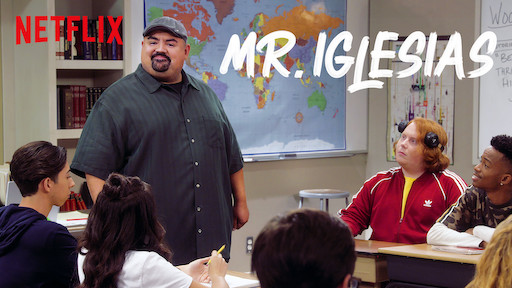 When I saw that Gabriel “Fluffy” Iglesias was getting a sitcom, I was stoked.  My family is a huge fan of Gabriel.  We quote him all the time.  (“HEY!…’Mere.”)  I think his jokes are on point, he’s got a good heart, and he’s just entertaining.

And I was so excited that his show was going to be about a history teacher.  Immediately, I started wondering what kind of history jokes he’d make, which are some of my favorite jokes of all time.  History + Comedy = Nerdy Fun.

…and then I watched the first episode.

Look, I think the show has a good heart.  It’s following kids who normally don’t do well in school.  Your slackers, your kids who have to work to support their families, your kids who simply struggle with school.  I love that, since those are the most like my students.  And being a comedy, I knew it would have heart while still being funny about it, which I appreciate.  (The really serious teacher movies like Dead Poets Society are great, but I can’t watch them often.)

But my God, this show plays into all the stupid–an inaccurate–teacher tropes.

Let me go through a few of them.

1. The principal gave the teachers an assignment on their hour long lunch break.

I literally almost laughed out loud when I heard that.  First of all, my lunch is 30 minutes at best, just like the kids.  If I need to make a call or run copies, that means I’m usually eating my lunch in about 15 minutes.  And also, if your principal is at all respectful, they’re not going to give you an assignment over lunch.  Most of the time, they give you longer than your lunch break to complete something unless someone screwed up.

2. Their “last day of school” was way more chill than I’ve ever seen.

The first episode takes place on the last day of school–which makes the rest of the plot that much more unbelievable.  On the last day of school, no one is just calmly walking around like that or even talking about school.   There were no finals, lockers were still full of books, and teachers didn’t look like they were about to die.  Clearly, none of the writers have been in school for a while (a point that was abundantly obvious).

3. Teachers were in the “break room” more often than their classrooms.

This irks me so much.  As a teacher, I rarely have any time to go to the bathroom.  Yeah, I said it.  So the fact that they’re all just standing around singing songs, making coffee, chit chatting, etc., it’s ridiculous.  We’re all frantically running around trying to get things done before the next class comes in in 4-7 minutes, depending on the length of your passing period.  Only one of your class periods is open as your prep, and more often than not, you have planning to do during that time.  That’s it.

4. PUBLIC SCHOOLS CANNOT COUNSEL ANYONE OUT.

Ok, let me pull in my rage here a little.  The entire crux of the show is that the principal and the guidance counselor are trying to “get rid” of the lowest performing students to boost the school’s numbers.  They delivered letters to those students via their lockers (um…unprofessional much?) and let the kids know they’d basically been “let go.”  Private schools can do that.  A student of mine came to my school from a private school because she broke dress code too many times.  Public schools are required to take everyone.  This is why public schools often have lower test scores.  By law, they are required to take anyone who comes to them.  We can expel kids for serious infractions, like drugs or weapons on school grounds.  Sometimes even bullying or fighting can result in that.  But let me tell you, even that doesn’t guarantee an expulsion.  One of my kids last year was so violent that we knew he was going to go off and hurt someone–an adult had to shadow him all day long.  But we couldn’t do much because he had an IEP–an Individualized Education Plan.  He had emotional issues that meant he was quick to anger, like trigger-quick.  We had to wait for the parents to pull him after he was suspended more often than not.

The fact that this show played it up like public schools could just “let go” of poorly performing students was insulting and severely misinformed.  I get that the point of the show is that Gabriel is trying to nurture those students, but this?  No.  Sorry, school doesn’t work this way.  And it’s just feeding the perceptions people have about public schools that are grossly misleading or plainly false.

I think what the show is trying to do is good.  And Gabriel’s history jokes were so funny.  But I can’t watch a show that so inaccurately represents my profession and that of so many of my friends at a time when our jobs are being attacked on virtually every front.  I take so much crap for it and I’m tired.  I’m tired of defending myself and my students from outsiders.