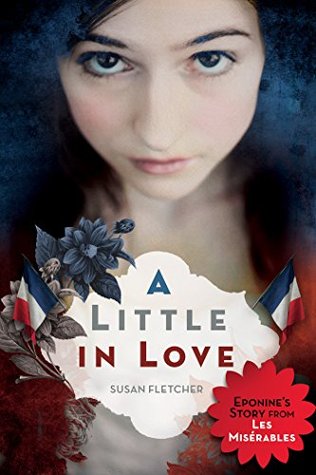 First Lines: I’m dying.  There’s no use hoping I’ll live or telling myself, Keep going, it’s only a small wound.  There’s too much blood on the ground.

I got this book years ago from Scholastic, back before I fell in love with Les Mis this summer.  I always intended to read it and in like, March, I watched Les Mis again so I’d have a basic knowledge of who Eponine was before I started this book.  And that’s when my love began.  So really, I have this book to thank for that.  But I needed to let it all breathe before I dove back into the world of 1832 Paris.

Eponine has never known kindness in her life.  As a young girl, she started to discover it through her family’s young servant girl, Cosette.  When they cross paths nearly ten years later, Eponine needs to decide what’s worth protecting and how far she’ll go to do that.

To sum it up, this is Les Mis from Eponine’s perspective.

In the end, I only thought it was ok. Part of that is because it wasn’t always true to the source material. If you’ve only ever seen the movie/musical, then you’re probably alright. But having just read the book a little over a month ago, some of the changes were quite glaring to me.

Most of the time, it’s true to the text, I’ll admit that. And I do mean to the text, not the musical. So like when Eponine first meets Valjean, he’s wearing a yellow woolen coat. And we get details about where Eponine lived in Paris and how she met Marius. Those were all accurate to the source. I did appreciate that. And I know some of the changes to the story were made because the timeline needed to be sped up or it would have been too confusing not to mention certain details early on (like Valjean’s name), but there were other changes I just didn’t think needed to be changed.

Eponine is an interesting character. She’s always been one, I think, that people are drawn to because she’s conflicted. Eponine’s a thief and poor and selfish, but she does have one stunning moment of selflessness everyone knows about. That’s not entirely what this Eponine is like, but it’s pretty close. This Eponine wants to be good. She wants to be kind, but her family tries to train her out of it. You can’t eat kindness, so why waste your time on it? Every time Eponine steals, she feels like she needs to do a good deed in return.

As for the other characters, I thought they were pretty much what I expected. Marius is a besotted fool who can’t see past his own nose, Thenardier is cruel, Gavroche is independent and charming, and Enjolras is passionate.

This story, I think, was about trying to give Eponine something of a happier story, even though the ending never changes. I kind of get that. But maybe because I have gotten so close to the source material lately, it feels wrong to mess with the existing story.

3 thoughts on “A Little in Love”