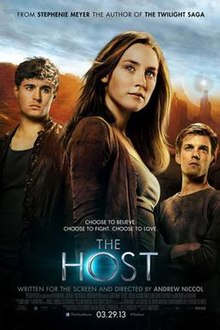 I just realized I’ve never done a review for this movie.  I saw this movie a few years ago for the first time (probably within a couple years of it coming out), but lately it sounded good again.  I pretty much forgot what was in the movie, but the book is one of my favorites and I certainly didn’t forget the plot.

In case you don’t know the story, a parasitic race of aliens has taken over Earth.  They claim to bring peace to the planet, but the few remaining humans are fighting to retain their minds.  Melanie Stryder is part of the resistance until she’s captured and a soul (the name the aliens call themselves) named Wanderer bonds with her.  But Melanie won’t go without a fight and it isn’t long before Melanie and Wanderer realize they need each other to find the family Melanie can’t forget about and Wanderer wants.

That was a really crappy synopsis, but I truly do love the book so much that if I don’t stop myself there, I’m going to end up saying things I shouldn’t.

First of all, this movie just fanned the flame.  I desperately want to reread this book again now, which sucks because I don’t have time for that.  But I’ll get to it again eventually.  It hits me right in the feels each time and I’m so mad about how underappreciated this book actually is.  That’s another topic for another time.

As for the movie itself, it does a pretty decent job of staying true to the original story.  It actually pulls off the dialogue between Melanie and Wanderer really well.  (Melanie and Wanderer are basically the same person, so it’s a fine like to walk to make sure audiences are always aware of who is speaking.)  But the book is something like 600 pages long and this movie is about 2 hours, so obviously a lot is shortened or missing completely.

That does, unfortunately, make the movie feel less cohesive.  The bonds between the characters aren’t as obvious.  It sometimes doesn’t make sense that a character would risk so much to save another when they’ve barely spent five minutes on screen together.  Having read the book multiple times, I completely understand what’s going on and why.  But I don’t think non-readers would get it as well.

I remember thinking this the last time I watched this and I definitely thought it this time: the guys all look so ridiculously similar that I literally can’t tell them apart.  It was like the casting agent called for all hot guys with chiseled cheekbones and cast them all.  I kept confusing one character for another because they just looked so alike.  It’s kind of hilarious.  The only one I didn’t struggle with was Ian (played by Jake Abel) because A) I know him from Supernatural and B) he was skinny while all the other guys were bulky.

It’s not that the acting was bad either, but everyone was virtually the same in this.  And, ok, I will admit that the acting isn’t the best at times.  Sometimes it seems really awkwardly played.  However, there are moments where I could tell the actors totally got their characters.  Uncle Jeb (played by William Hurt) was one of those.  He walked that line between madness and wisdom like a champ, which is why I love Uncle Jeb.

I do love this story and I think, if you don’t have time to read the book, this is a good enough version.  But, once again, the book is way better.