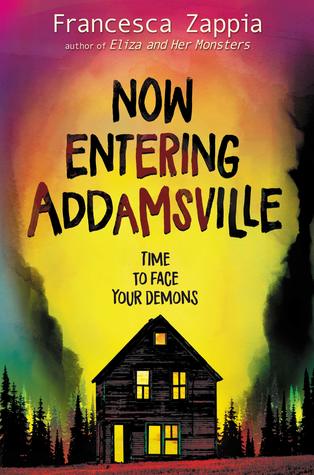 First Lines: George Masrell’s house went up in flames at 2:59 a.m. on a frost-tipped october morning.  Masrell was eighty, lived alone on the northeast side of town, and spent his days cleaning the bathrooms at Addamsville High.  He was liked in the way outdoor art installations are liked: for his quirks and his reliable permanence.

When I saw Zappia had a new book coming out, I was super excited.  And the fact that it’s set in my home state of Indiana and the title reminded me of the Addams Family was an added bonus.  Really, she could have written the phone book and I still would have read it.  Getting the ARC was a big win for me.  (Book officially drops October 1st!)

Here’s the official synopsis: Zora Novak has been framed.

When someone burns down the home of the school janitor and he dies in the blaze, everyone in Addamsville, Indiana, points a finger at Zora. Never mind that Zora has been on the straight and narrow since her father was thrown in jail. With everyone looking for evidence against her, her only choice is to uncover the identity of the real killer. There’s one big problem—Zora has no leads. No one does. Addamsville has a history of tragedy, and thirty years ago a similar string of fires left several townspeople dead. The arsonist was never caught.

Now, Zora must team up with her cousin Artemis—an annoying self-proclaimed Addamsville historian—to clear her name. But with a popular ghost-hunting television show riling up the townspeople, almost no support from her family and friends, and rumors spinning out of control, things aren’t looking good. Zora will have to read between the lines of Addamsville’s ghost stories before she becomes one herself.

It’s Zappia’s first book that doesn’t deal with mental illness. Instead, this is more of an urban fantasy (kind of a curve ball, right?). Zora can see ghosts in her small town, a town where you never leave even after you die. But not only are there ghosts, we also have lovely little demons running around. The paranormal edge was slightly unexpected, but it worked out pretty well throughout the story.

However, if you’re still expecting something deeper, you’ll get it. There are serious issues like grief, poverty, and bullying (not in the way you’ll expect) here. And they’re handled with extreme care, in a way that you get it when you’re done.

Zappia’s writing style is immersive. I’ve been in a bit of a reading slump lately where it seems like nothing has pulled me in, but this had no problem doing it. It didn’t matter where I stopped or started, I was all in in just a few pages. It’s just so smart.

Zora is an interesting character. She’s very angry about pretty much everything. She’s got a short fuse and it’s easy to set her off. She’s got a bad reputation and she’s working on picking up the pieces of her life as everyone turns against her. She’s not your typical heroine. She’s impulsive and troubled, but she’s got a good heart to her. There were times when I had to put the book down for a while, though, because Zora’s intense and I can’t handle a lot of that at one time. There’s only so much rage I can absorb before I need to get away from it. But that doesn’t make her a bad character by any means.

I was a little disappointed with the ending, though. The story had been so creative, so engaging the whole time, and then I felt like the ending kind of missed the mark. It still (mostly) wrapped everything up, but it felt too abrupt.

However, as a Hoosier, I appreciated the Indiana jokes. Mentions of Conner Prairie and the Colts were very much appreciated.

It was intense, but it was a good read. Definitely worth checking out.  (Though sometimes reading this before bed is not a good idea.  I did that one night and I got to a super creepy part right before I hit the hay…it was not good.)