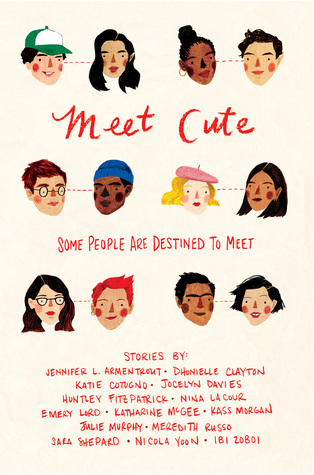 Some people are just destined to meet.

I found this anthology at the library and, since my reading time has been limited by going back to school and my writing, I thought a bunch of short stories would be the perfect thing.  I could read for 20 minutes and finish a whole story!  And since these were supposed to be cute love stories, it was even sweeter.

There’s really not a synopsis for this since it’s just a collection of 14 short stories (authors are listed on the cover), so I’ll just get started.

Overall, this was pretty adorable.

No, every story was not a winner. But the stories are imaginative, with lots of diversity and some that were incredibly cool. Some I didn’t want to end. I would read entire novels on that premise if I could. Some writers played around with writing in 2nd person, which is definitely a learning curve since that virtually never happens.

The best stories were:
-“Siege Etiquette” by Katie Cotugno, a story where two teens are stuck in a bathroom at a party
-“Click” by Katharine McGee, a blind date from a dating app
-“The Dictionary of You and Me” by Jennifer L. Armentrout, involving a librarian and a new boy
-“259 Million Miles” by Kass Morgan, a semi-futuristic story of two teens trying to get sent to Mars
-“The Department of Dead Love” by Nicola Yoon, a futuristic story where relationships can be autopsied to see why they ended

Those stories worked for me. They all had lost, nervous, or shy main characters who unexpectedly find something in the story.

That’s not the say the others are bad; it’s just that I related to these other stories most of all. “Somewhere That’s Green” by Meredith Russo was a fantastically engaging story about a trans teen. “The Unlikely Likelihood of Falling in Love” by Jocelyn Davies was a cute story about a female mathematician calculating the odds of finding your true love.

There were many stories of LGBTQ teens, which is generally not my cup of tea. However, that doesn’t mean these stories were any less entertaining. I did genuinely like most of them.

But in an anthology of like 14 stories, there were bound to be a couple of duds. I won’t name them, but it seemed pretty clear some of them didn’t quite know how to plot out a short story. It felt like we were never getting to the point, that we spent all this time understanding the setting and the main character, but the cutie didn’t come in until the last two pages. That was a bit of a let-down.

Overall, this anthology was a lot like getting a cute romantic comedy in 20-30 minutes. Not a bad deal, if you ask me.