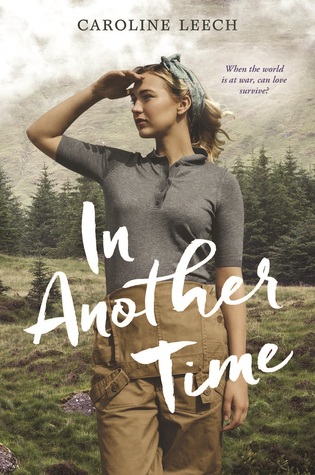 First Lines: Maisie’s shoulders burned, her palms were torn, and her ax handled was smeared with blister pus and blood.  Again.

This caught my eye for a couple of reasons.  1) I’m loving this girl’s look, the head scarf, all of it.  2) It’s set in Scotland, which I’m kind of obsessed with right now, especially when you also make it historical in any way.  This is World War II, so I was definitely game.  And 3) it covers a part of history that doesn’t get recognition.  My favorite kind to read about.

It’s 1942 and Maisie wants to do her part to serve her country.  But being only 17, she isn’t old enough to enlist–so she joins the Women’s Timber Corps as a lumberjill.  Maisie loves her new freedom in the Highlands and her growing friendships, especially with the enigmatic John Lindsay.  As John and Maisie work side by side felling trees, Maisie can’t help but feel there’s a spark of something more there.  But every time she starts to get close to John, he pulls back.  It’s not until Maisie helps John after a logging accident that she truly begins to learn his secrets.  Is she strong enough to help put him back together, especially if there’s nothing left to piece together?

This was really cute!  In this story, we meet Maisie, who is spunky and determined to do her part in the war (and also to get away from her parents). The Women’s Timber Corps isn’t exactly what she had in mind, but she wants to do the best she can regardless.

It’s a story that’s as much about friendship as it is about love. The story is billed as a love story, which it is, but most of the time is actually devoted to Maisie and her budding friendships with these other women of the WTC. It was really neat to see those develop, especially as all of the characters grow throughout the story.  I’m such a sucker for character development.

I got pretty into this story because of the characters, but props to the plot. I don’t want to say that it was daring, per se, but there were some big events that happened that felt realistic, like when Maisie had to make a really difficult choice and went with the harder of the two options because that’s just Maisie. This was just a really interesting story.

I’m very interested in checking out what else this author writes because her writing style is engrossing, easy to read, and entertaining.