Hey everyone!  Part of the reason I haven’t been updating lately is because I’ve been rereading one of my favorite fantasy series, a series I did reviews on a few years ago.  But now that I’ve finished the series in anticipation of the upcoming standalone 4th novel, I thought I’d kind of post about this series. 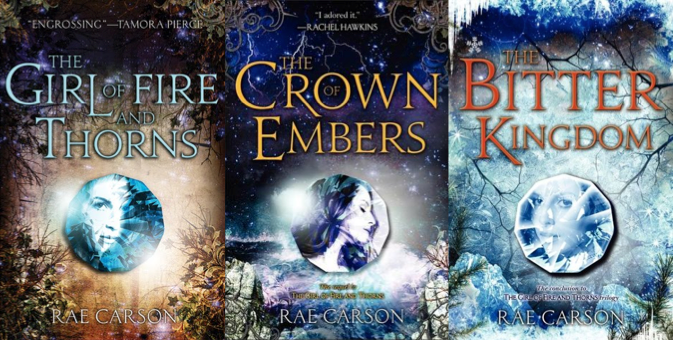 If you have not read this highly engrossing series by Rae Carson and you enjoy Sarah J. Maas books, I implore you to check this out.  If it hadn’t been for this series, I would not have discovered my own love for high fantasy.

The basic gist of this that we follow Princess Elisa of Orovalle.  On her 16th birthday, she’s married off to the much older (about 10 years or so older) King Alejandro of Joya d’Arena, a neighboring kingdom.  But Elisa is different from other princesses–she’s been chosen by God to have a special destiny and there’s a pulsing, living gemstone in her bellybutton prove it.  She’s been married off to Alejandro with the hope that she can help save his kingdom from the attacking Inviernos, who are determined to destroy not only Joya d’Arena, but also Orovalle if given the chance.  Initially just a pawn, Elisa grows into her new role and becomes a formidable leader in her own right.

And all of that is just book one, like the first half.  I dare not tell you what else happens because the surprise is half the fun.

This series is beautiful for so many reasons and I don’t think it gets enough credit anymore because it has been out for close to a decade now.

Part of its beauty comes from Elisa’s transformation.  In the beginning, she’s the last person you’d ever expect to choose as a new queen–and she knows it.  Her self-confidence is non-existent.  But as the story goes on, we see her start to believe in herself as she’s forced to either stand her ground.  And it’s so empowering to read, especially as we see others not believing in her and she continues to believe she knows what’s best for herself.

But what’s also beautiful about this is the struggle.  The conflicts come from every angle, from every side.  Elisa is never truly given respite from it all and these challenges help to show who she’s become.  Each one helps forge Elisa into a stronger person and I love that.

Truly, if you like the way Maas crafts a fantasy story, you’ll enjoy this.  And these books are shorter while not skimping on the details.

The stories are clever, the characters are charming, and the writing is ace.  I feel like I’ve fallen headlong into the stories every time I start reading them.  They’re perfection.

And they give me faith.  Elisa was so sure she knew exactly what her life was going to be like and then there are all these challenges that came her way that made her an even better, stronger person than she was before.  That transformation always hits hard, no matter how old I get.

It’s beautiful.  It’s suspenseful.  It’s sad at times.  But it shows strength in its purest sense, a strength that comes from who you are rather than from exerting power over another person.  I love that.