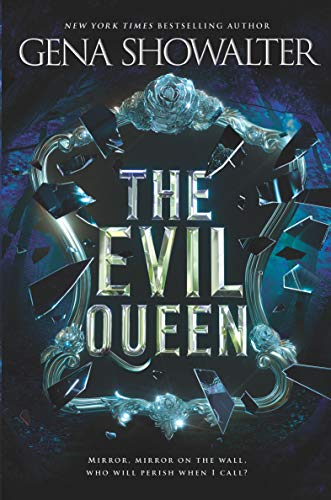 First Lines: Why do we love fairy tales?  Oh, let me count the reasons.  Magic. Inspiration. Adventure. True love.  But there are reasons to hate these stories, as well.  Murder. Betrayal. Heartbreak.  Some characters live, some die, but all suffer in one way or another.

This was one of the books I managed to check out from the library like a month before the doors closed for the pandemic.  And I was actually trying to decide if I even wanted to read it.  Showalter can right an amazing story (Alice in Zombieland, anyone?), but with so much bad in the world right now, did I really want to read about an anti-hero, an evil queen?  Somewhat reluctantly, I dug into this.

In the realm of Enchantia, mythical creatures and magic run rampant.  And those fairy tales you know?  Those aren’t just stories here–they’re prophecies of the future.  Everly Morrow is only just learning all of this.  Raised in the mortal world, Everly thought she was normal…until she developed the ability to commune with mirrors.  Turns out she’s a real-life princess of Enchantia.  The bad news?  She’s fated to the Snow White’s nemesis, the Evil Queen.  With amazing abilities, Everly returns to the land of her birth and meets Roth Charmaine, who is clearly Prince Charming.  Even as sparks fly between them, their relationship is doomed.  And as the betrayals mount, it gets harder for Everly to turn away from the dark magic she knows she can harness.  Can she resist or will she become the villain everyone expects her to be?

I’d be lying if I said I was immediately sucked in. I wasn’t. It took days for me to feel like I wanted to keep reading. Everly is immediately reviled by everyone who meets her for no real reason. No matter how good she tries to be, everyone hates her. It was hard to want to keep reading when there were a lot of negative emotions like that so fast. But I kept at it, hoping it would get somewhere.

And then it did. I can’t say when exactly I started falling into the story, but there was definitely a point where I wanted to start reading about what happened next.

The characters weren’t always as deep as I wanted them to be. Like, outside of maybe 3-4 characters (and even that might be a bit optimistic), we didn’t really get to know any of the characters behind the basics. This story is ambitious. There’s a lot happening in the plot. Ergo, there was little time to really delve into character development. Plot twists and betrayals? Sure. But actually feeling a connection to multiple characters? Didn’t happen.

That’s not to say I didn’t like the characters we did get to know. Everly is an awesome character who fights that tension between good and evil the whole story. What makes someone good? What makes them evil? The fact that she asked this question the whole time added another level to the story. I liked that it played with that question so much because it really is about perspective–how do you justify what you’ve done when it means hurting someone else?

The connection to Snow White, while absolutely prevalent, isn’t quite what you think it’s going to be.  (Which was good.  Snow White is not my favorite fairy tale.)  It’s not clear who is who and that’s intentional. I kind of liked that, the puzzle of trying to put all that together while reading.

I really enjoyed the fantasy elements and the morality of the story. I’m eager to see what the next book brings.