First Lines: After Anne’s father died, her mother often said that sorrow was the only sun that rose for them. Her mother had since followed him into the darkness of death, leaving Anne to face the dawn alone.

I love a good pirate story. I was into it as a kid, but the more I understand their oddly democratic society as an adult, the more interesting they are. So with this story supposed to be about Blackbeard, who was such a cool freak, I was in.

Blackbeard the pirate is known for the terror he caused, but at one point he was a young man trying to find his place in the world. Edward “Teach” Drummond has just returned from a year at sea to find that his life…well, it’s really not his anymore. His father, one of the richest merchants in Bristol, has arranged all the pieces and Edward must follow the plan–or else. Affianced to a girl he doesn’t love and desiring only to be back on the water (something his father won’t allow), Edward finds his world getting smaller and smaller. Anne, penniless and orphaned, is about add “homeless” to the list. Forced to take a job at Master Drummond’s house, Anne dreams of leaving England and sailing to the Caribbean where her mother was born. From the moment Anne and Edward meet, they see how trapped they both are. But can they escape their circumstances? Is it worth it?

I was really excited to read this. Except…nothing happens. I kept waiting the whole book for something to happen. I mean, there are plot things going on. We see the struggles of Anne and Edward, but the pace was just so slow it felt like nothing was ever going anywhere. What I really wanted to read was a pirate book and that is definitely NOT what I got.

This whole book is exposition for the real pirate story, which I assume is what the sequel will be. This is Anne and Edward both having crappy lives, feeling trapped by society, and wishing they were somewhere else before extra crappy things begin happening. I felt no suspense, no drive to the story. I wasn’t even really invested in the characters.

Let’s talk about a few things here. First of all, I felt historically speaking it took a lot of liberties (a fact the author acknowledges). We really don’t know anything about Blackbeard’s childhood/adolescence. But let’s allow that because of artistic license. Beyond that as our indicator, it didn’t really feel tied to any specific time period. It could have been anywhere from the 1500s to the 1800s (it’s really the early 1700s based on Teach’s life). Literally nothing distinguished the setting. Setting had a lot of struggles.

There are really only two “real” characters in this story: Edward and Anne. And I’m not just picking them because they’re the main characters. Every other character is a caricature of a person. The vast majority of minor characters are meant to be evil. For Anne, there are two maids who make her life miserable. For Edward, they’re two men who are supposed to care about him–and a vicious fiance. There are some “good” characters, but we see very little of them. It ended up seeming almost whiny from Edward and Anne’s perspectives, how everyone is out to get them. I guess the point is that they weren’t supposed to have any allies besides each other, but man did it make the story a downer.

I will give props to one aspect of the story, with a caveat. Anne is a mixed-race main character. Her father was white and her mother was a West Indian slave, their story a love story. While I appreciated that for that (and because historically, that obviously happened in England just like it happened in the US, if pretty rare in both places), it never went anywhere. Anne was very rarely distinguished because of that. Sure, there were references to how she wasn’t going to “be accepted” by society because her skin is “a shade darker”, but even that only came up in a few scenes. I was a little surprised by that, especially since pretty much everyone was xenophobic in England in the 17th and 18th centuries.

It just felt like, for a historical fiction, someone didn’t do much homework.

First Lines: The sound of my knife slitting across a throat feels much too loud in the darkness.  I catch the pirate before his corpse hits the ground and gently lower him the rest of the way.

You know, there aren’t a lot of duologies out there, and it’s kind of interesting to see how a story arcs over only 2 books.  But like, I also wasn’t going to turn this down when it has female pirates and clever plot twists and sirens.  Can’t turn that down.

Alosa has finally done it: she’s reunited the three pieces of the legendary treasure map and captured the pirates who tortured her.  The only thing that unsettles Alosa is that the devilishly handsome enemy-turned-first-mate, Riden, is loyal and taking orders from her…but she isn’t sure it’ll always stay that way.  Besides, he’s a distraction when all she wants is to have Vordan, the man who tortured her, face her father’s justice.  But when Vordan tells Alosa a secret her father has kept for years, she finds herself in a deadly race to outpace her father.  The Pirate King isn’t going to let Alosa wander free knowing what she does…but Alosa isn’t just the daughter of the Pirate King.  She’s also daughter of the Siren Queen, and she’s going to use it.

So when I read the first book in this series, I thought it was interesting. Pirates (which are awesome), sirens (which were interesting), and a hot first mate, OH MY! I noted that there were some issues with the writing from time to time, but it was something I could overlook.

Oh my God, the beginning was so slow. I struggled to even want to pick up the book for like the first sixty pages. It wasn’t because I’d forgotten what had happened or who the characters were; I read the first book only a few months ago and still remembered most of it. It was just irritatingly slow and the writing was frustrating to me. There were parts that just…ugh. It was a chore.

Thankfully, after I got past the beginning, things started to get more interesting. And this mostly came in the form of Alosa’s inner conflict. When she started being vulnerable to those around her, then I bought in. But for whatever reason (and I usually love a good fight), I just could not get very far into this whole Pirates vs. Pirates conflict without wanting to chuck the book across the room.

The book does do some interesting things. The pirate stuff and the siren stuff are expounded on more and we get to explore Alosa’s abilities more. Those were interesting. And there are some good cliffhangers that drew me in. I even started reading this during commercials while watching a show because I wanted to keep reading.

I know I sound pretty negative at the beginning, but don’t completely write this off either. Just make sure it’s actually something you’re interested in reading before committing because, if you’re like me, you’ll question your decision at least once. 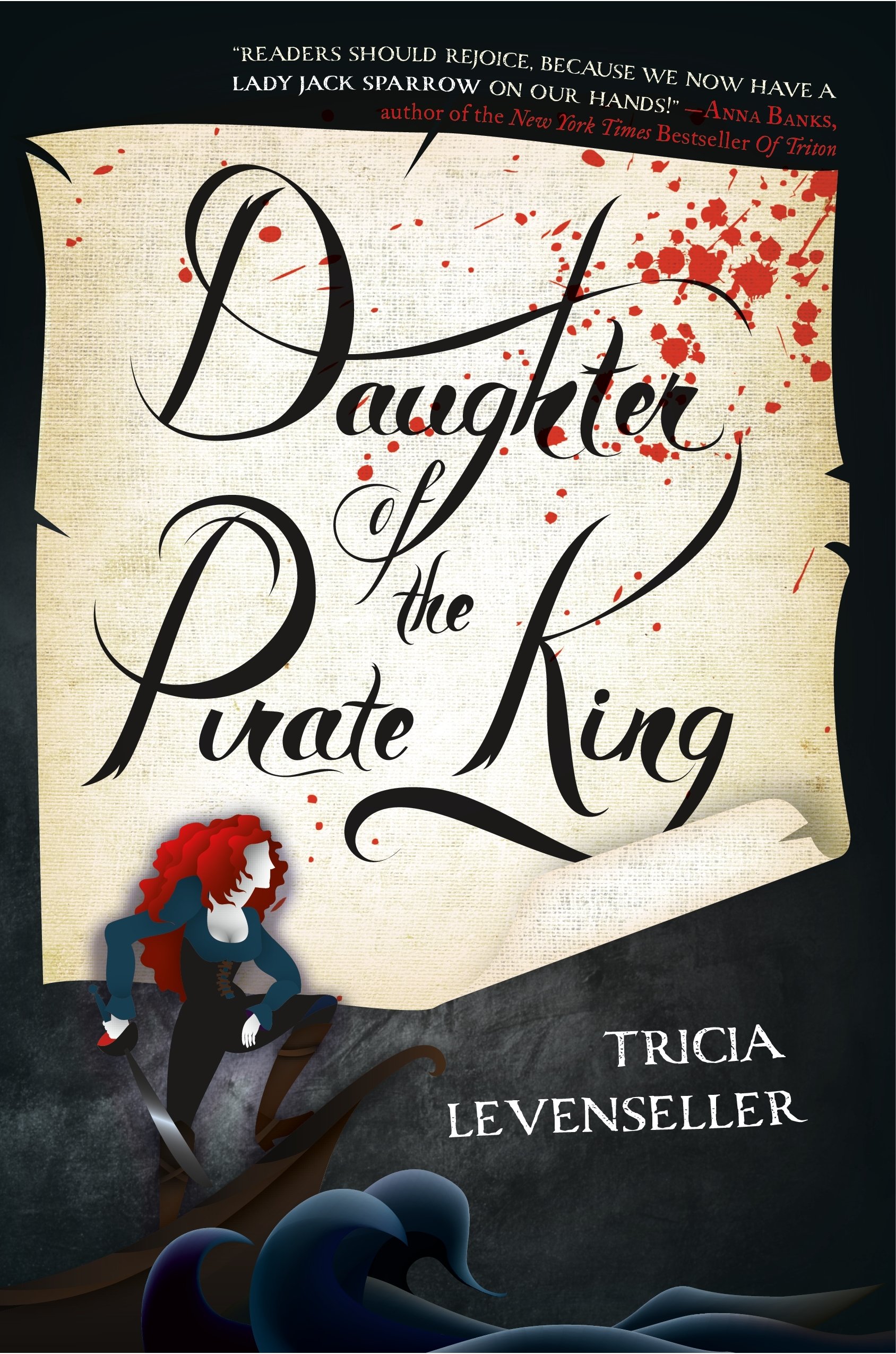 First Lines: I hate having to dress like a man.  The cotton shirt is too loose, the breeches too big, the boots too uncomfortable.

I was intrigued by this book before it got a cover.  Then, after it did…I was a little disappointed in the cover.  I thought it looked cartoony and gave off a totally different vibe than the synopsis did.  I thought I’d misjudged it, so I let it sit on my to-read shelf.  When I was at the library last, it was available and truly, I can’t stay away from female pirates.

Seventeen-year-old captain Alosa willingly allows herself to be captured by her enemies in a desperate quest to find one part of a famous treasure map.  Being captured by them allows her to search their ship without raising too much suspicion.  More than capable of handling the crew, there’s only one thing in Alosa’s way: Riden, the suspicious first mate who seems to suspect something isn’t right.  Clever as he may be (and hot to boot), Alosa has more than a few tricks up her sleeves.  Besides, failure is not an option for her.

Alosa is a lot of fun. Snarky and stubborn, she’s not about to let anyone get the jump on her if she can help it. And most of the time, she’s one step ahead of everyone else. I liked that cleverness and foresight.  The quote at the top of the book from Anna Banks calls her a female Jack Sparrow (I’m sorry, Captain Jack Sparrow), and I see the similarities.  I’m not sure I’d go that far, but Alosa does have that same sarcastic, devil-may-care streak they both have.  But she’s not a drunk like Jack nor does she rely on luck.  Alosa writes her own destiny.

For the most part, I found the other characters delightful as well–though a number of them felt flat. Obvious exceptions would be Draxton, the captain who kidnapped Alosa, and Riden, his first mate. And there are other goofball side characters who had a bit of a personality of their own that I enjoyed.

While the characters may not have always been overly impressive, I thought the action was. The plot was very fast-paced and always interesting. It was just a matter of me finding time to read it! But between Alosa being so clever and the constant fights (yeah, pirates) and Riden being suspicious, there was always something going on. I had a lot of fun reading about it all, especially when Alosa got herself out of some tight scrapes. It might be a weird way of describing it, but I thought those action scenes were well-edited. It always seemed to focus on just the right information without going too long and always stayed focused on what was important.

Oh, and there were a few flirty scenes that were muy caliente.  Like, surprisingly so.  I was reading it at school before our open house when parents come meet us and I was pretty sure that more than once I was probably blushing when a parent walked in.  (Not that it’s explicit–just caliente.)

I know this is supposed to be a duology, but as I got closer to the end, that well-edited compliment started to feel a little less so. The story builds up a lot along the way and then as you know the ending’s coming, there’s way too much to be wrapped up or even described well. That started to feel a little like the story had either lost its momentum or had lost its aim.

But otherwise, I really enjoyed that. I’m interested to see where the story goes next.