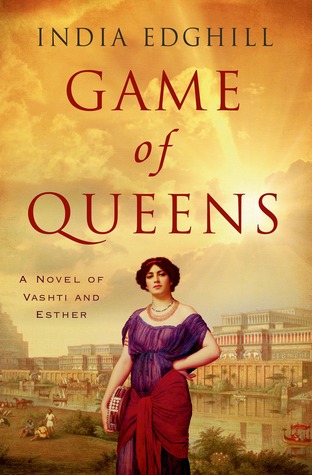 Ok, so while this isn’t YA, I thought I would still share this because I like retellings.  In the last like 3-4 years, I’ve really been taken with the story of Esther from the Bible.  Now, I’m not what one would call “religious”, but I can get into a good story of women standing up for what they believe in.  So when I heard about this, I was in.

I’m copying the blurb in because it’s good: You may know part of the story already, but you only know what history has passed along. The story of how Vashti, Queen of Queens, the most beautiful woman in all the empire, defied the king her husband and so lost her crown. The story of how Ahasuerus, King of Kings, commanded that the most beautiful maidens be sent to his court so he might choose a new queen. And you may know how he set the queen’s crown upon the head of the virtuous and beautiful Esther, and how Queen Esther herself defied both king and law to save her people from a treacherous fate.
What India Edghill brings us in Game of Queens is the story of power and treachery, blood and deception, bravery and romance that surrounds the court of Ahasuerus and brings to life two of the most celebrated female heroines in all of history.

This was good. It took a very long time to get started, though. Esther doesn’t even enter the story until about halfway through. Before that, our narrators are Daniel (yes, the Daniel who survived being eaten by lions) and Hegai, the Chief Eunuch of the King’s household. It gets more interesting when Vashti becomes a narrator, but it was still slow until we got more to Esther’s story. Maybe that’s simply because that’s what I wanted to read the most.

I did end up liking the characters quite a bit, especially Vashti. Esther is clever and head-strong, but Vashti was raised as an empty-headed, vain princess who eventually decided she wanted to be more than that. And it was sweet to watch her journey. And of course, I enjoyed Esther.

I was a bit disappointed with the love story, such as it is. As the author admits in the beginning, it’s kind of hard to make Ahasuerus into a respectable character when he was doing all of these stupid things in the meantime. But Esther’s draw toward him seemed…awkward. Forced. I wish that had been handled a little better, but I realize the source material kind of limits what can be done.

Anyway, it was enjoyable to read; it just took a long time to get going.