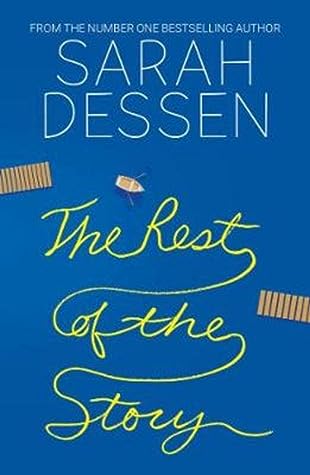 First Lines: There weren’t a lot of memories, especially good ones.  But there was this.  “Tell me a story,” I’d say when it was bedtime but I wasn’t at all sleepy.  “Oh honey,” my mom would reply.  “I’m tired.”

It’s probably semi-embarrassing to admit this, but it’s been quite a few years since I read anything by Sarah Dessen.  (According to my Goodreads, it’s been nearly 4 years…)  But I heard so many good things about this book and it being a Goodreads Awards finalist, I decided I needed to read it.

Emma Saylor doesn’t really remember her mother, who died years ago.  The only thing she does remember well are the stories her mother told her about the lake.  Now that it’s just Emma and her dad, life’s pretty predictable.  Or at least it was.  While her dad’s on his honeymoon with his new wife, Emma is sent to stay with her mother’s family at North Lake to stay with the grandmother, aunt, and cousins she doesn’t remember at all.  It soon becomes clear that there are two different lakes: North Lake is a working class community while Lake North, where her father spent his summers, is a rich resort area.  And the longer she says with her family, the more she feels divided into two different people.  With the help of her cousins and her new-old-friend Roo, Emma is determined to put together the pieces of who her mother was.

I forgot how good Dessen’s writing is.  Nuanced and subtle, her stories never quite go where you initially thought they would, but they certain go where you want them to.

In this story, we’re introduced to Emma Saylor, Emma to her dad’s side, Saylor to her mom’s side. For the sake of simplicity, I’m going to call her Emma. Emma is anxious about virtually everything, bordering on OCD as a result of her parents’ divorce and her mother’s sudden death about five years earlier. I really related to her anxiety, seeing as I’d been just like her at that age. But aside from all of that, Emma’s curious. She wants to use this summer to get to know her mom better, from the memories of the people at North Lake.

I didn’t think I would, but I really liked the North Lake/Lake North differences. It’s a class issue and I liked how it was portrayed. Emma technically comes from Lake North stock, growing up with money. But her mom’s family is from North Lake, the working class side of the lake where most people hold more than one job in the summer. It was all shown very well, sometimes showing their stark differences, sometimes focusing instead on how both sides have the same struggles.

Most of you know Dessen’s writing style–you know what you’re getting into. It’s the same kind of story we’ve come to expect. It’s deep but charming and funny with real characters. It’s sweet but also so real you can’t look away from the bad times either. There are plenty of ups and downs for Emma and the others and I was just moved by it.

Such a gorgeous story. Worth the read.  And so worth being a Goodreads Award nominee.